The ABC in Australia keeps commanding strong audience support and political support despite a persistent and sometimes mysterious putsch against it. Lee Duffield, formerly a long-serving journalist with the ABC, says the danger might be especially intense these days, but has always been present.

Since the day that the Australian Broadcasting Commission (now Corporation)  started in 1932 newspaper interests have tried to get it strangled. When the independent news service started in 1947, efforts were re-doubled. As a young journalist at ABC News my old bosses there would reminisce about going to work for the ABC, to get away from being identified with the traditional, heavily conservative or extreme-right bias of the press. It was even considered a radical thing to be formally and operationally committed to decency, fairness and balance — the “extreme centre”.

Practising journalism around the town,  it was always curious how bothered the papers were by the ABC and how it was spread to their younger journalists – they sort-of had to be against the ABC if they wanted to drink with the editors. Never mind, the public liked ABC.

In 2018 the Federal Council of the Liberal Party voted 2:1 to sell-off the ABC. The vote has never been rescinded, raising questions: Might the present government have a go at it if re-elected, and emboldened, next year? What are the names and political identities of the ones who supported this move, and does it signify some sort of broader take-over move against their whole party by the extreme fringe  — like the Republicans in America?

Now we have a new putsch against the ABC involving the radical lobby, the IPA, funded from some source or other, linked up with some very hell-bent “journalists” on The Australian — re-doubling again. It’s a scheme with two hoped-for ends: (a) Get the ABC sold cheap to mates who can put ads on and prepare it for re-sale at a high mark-up with junk programming, and (b) in the process get closer to where only “their” point of view gets heard, through the partisan media outlets, being 2GB jocks, Sky “News”, News Corp press.

Apart from the impertinence of it, there are obvious bad impacts for Australian life and culture. Personally I’m always intrigued by the childishness as well as irritated by the viciousness – what about all the other people who don’t agree with “them”, getting to have a say?

PLEASE SEE THIS SHORT VIDEO FROM JONATHAN HOLMES, all that “they” are not: reasoned, informational and fair. 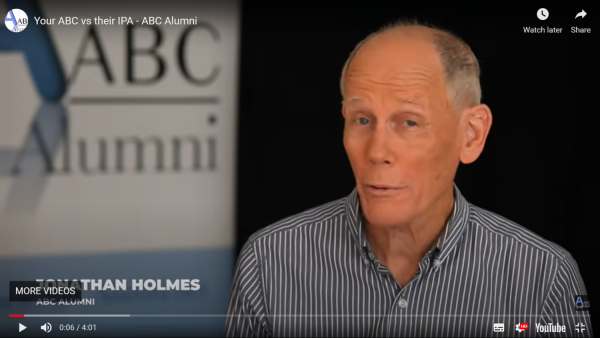