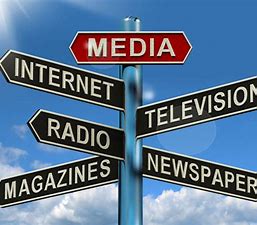 It is a changed scene since broadcasting regulations providing oversight or program guidelines were dropped from the 1980s, the same as with the former Federal Communications Commission standards in America. The present-day barrage of extravagant opinion-making on commercial media is one result — different to the ABC which being publicly-owned has to retain standards of accountability and fairness.

ABC broadcasters know they have formidable public support. Audience research over the decades shows that high proportions of the population from all walks of life use the service, depend on it, like it and respect it. It is sometimes conditional support, they do not like everything, but it gives the ABC, despite the six years of official abuse, breathing space to fall back on prepared positions, as it has done through crises past.

The falling-back is done in part through facilitating demands from conservative interests for much air-time to promote their views; it is appeasement, but also an opportunity to demonstrate a fair access principle.

Famously, in the olden days, when Doug Anthony was the Country Party Deputy PM and Primary Industry Minister, 1967-71, ABC staff used to call their radio Country Hour the “Country Party Hour”. Anthony was given free access for long uncritical interviews. The staff members thought it was great because it satisfied much of the conservatives’ need to have all the say, and locked them in to maintaining the ABC — enabling the rest of the ABC to get on with providing whatever news, cultural sports or other programming was scheduled for the population at large.

One important principle still applied. Members of the Rural team who tended to characterise a good team member as one with “real cow shit on their boots”, remained professional broadcasters, and despite major lapses like the ultra-indulgence of Anthony, gave essential service to often isolated people looking after key segments of the economy. The writer remembers his farmer uncle on the veranda, staring across the paddock while waiting for lunch – a man who would roll a cigarette with one hand after years holding the reins behind a plough. The Country Hour would be on and it gave him his weather, train and market intelligence, and more, garnished with a reliable bulletin of ABC News.

That is the continuing pattern of the ABC: service on many fronts, often service the commercials will never give, provided by broadcasters consulting their professional values, like the journalists guided by received news values, e.g. new and interesting, important and informative – no snide agendas.

So why this hatred of it? The answer is that a political and financial ideology which preoccupies certain people, is obstructing the rest of us just getting a good range of services from the ABC, value for money, Australian culture first.

On one hand the government of the day believes in privatising economic life, to the direct benefit of wealthier constituents; so it foregoes revenue, as with the scheme to cut company taxes, and will sell-off public assets where it can. Some might themselves watch and listen to the ABC but that clearly gets outweighed by loyalty to party, money and power – so selling-off is on the books. Secondly government trades favours with corporate backers, in the case of media indulging the demands of commercial broadcast interests for market protection, by pushing down the ABC — “people’s choice” not coming into it.

The relationship is being demonstrated by the trend for conservative Ministers to make declarations or announcements through 2GB or Sky, where they can get the easiest, most matey, often fawning form of interview. The ABC is much less favoured, as it is independent and still does critical interviews: they look for the new information, hold the speaker to account, don’t run it on-and-on. It does itself have a small cooperative part in this game by giving away slavish credits. Where Ministers will only talk with 2GB or Sky, the audio or vision has to be recorded for replay, and credited to them by name; they get a free ad on ABC. That goes against the alternative, that often if you take an allowable short excerpt — and copyright laws give fair leeway on this – you say it was “on radio”, or “on commercial television”.

There would be an element of best-practice in that, by resisting the idea of state announcements going out only through a few channels, and being immune to critical handling. Traditionally the past masters of such news rationing were successive governments of France, giving out all key announcements only through the official news agency, AFP. If other media wanted announcements on time they had to buy expensive subscriptions to that agency, and then would face a run-around to place questions, fill gaps in the story. The arrangement was hardly in the public interest. The main historical case in Australia was the undoing of the Bjelke Petersen media machine in Queensland, which routinely played favourites among outlets. The Electoral and Administrative Review Committee set up by the Goss reform government produced guidelines saying government announcements had to go to all. If one journalist got information exclusively, through initiative, then once it was published, government media had to give it to any others wanting to follow up.

In what further ways does ABC fall back on prepared positions?

First and most obvious is that the withdrawal of money means withdrawal of programming. The ABC, fighting-back, has the option of dropping programs where it will generate notice, or pain for audience members — maybe some public resentment at the cuts.

The axing of the long-term 7:45 am radio bulletin announced last month, might set off thoughts about what media services can do for a democratic society. A set-piece product where the contents are done according to strict journalistic protocols, including checking, can be called “plenary” media, one dependable place where all citizens can catch up on the world overnight. Such products are a relief from the scramble and confusion of DIY media, fake news, trolls, hacking, random bigotry and all that – just check the 7:45 and you are OK for the day. Or you were. (Possible conflict of interest: the writer did production work on the 7:45 for four years including the overseas component – important in Australia because of world time zones – and at other times strove aggressively to report stories that would get into headlines on that show). 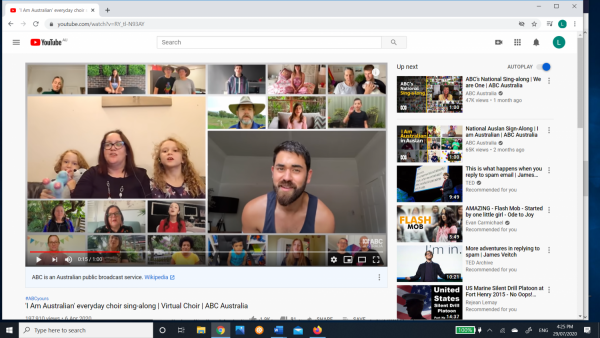 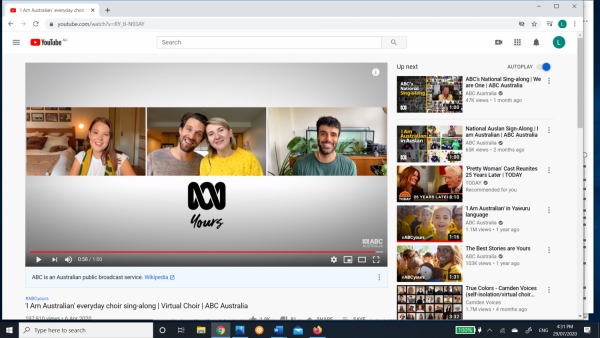 A second option is that the ABC can rally public support, as with its “eight cents a day” campaign in the 1980s. Always keeping out of partisan issues it made the exception to commend its own value for money to audiences. Its 2020 promotion using the “We are Australian” song, on a theme of social inclusiveness on “your ABC”, gets its legitimacy from the ABC charter. This charges it to “cultivate a sense of national identity … and reflect Australian cultural diversity …” It is also told to take account of the “multicultural character of the Australian community”.

The on-air presence of ABC is conscientious about promoting minority and women’s interests, including gay and same-sex, and indigenous, in step with popular but disputed ideologies promoting inclusiveness in social life – as it happens, in line with the charter. One test, from a few months’ monitoring: the prime time television show The Drum has a clear majority of female guests and presenters; four nights a week it will have a female majority. To this writer, when it had mostly-male personnel during a recess period it lacked an accustomed originality or newness. Drawing in guests from women’s agencies, and across the mix of ethnicities, identities, race or beliefs has proved a workable formula. Theming a program on such a social mix opens it to critique, over who misses out and why, or whether it gets too specialised for news-time, at 6 pm; but objections, where any, look to be few and far between, even in the right-wing news media out to get the ABC. 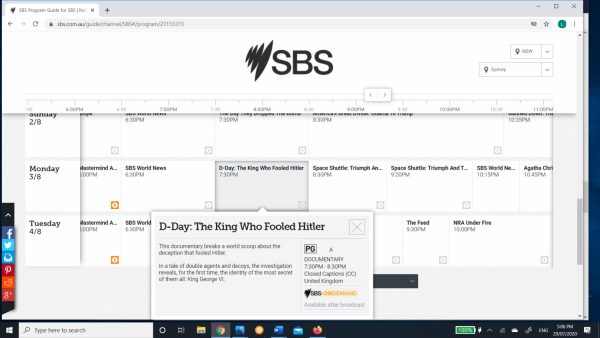 The ABC in fact might be out-doing the Special Broadcasting Service (SBS) which is expressly tasked to reflect multicultural Australia. It does have a dedicated indigenous network, but SBS One has gone definitively Anglo-Saxon, with series after series about the English royal family, or English trains, or archaeologists, as well as its perennial stand-by the Third Reich. Is it using free hand-out material from the British Council? As gags go, the representative composite television program might be: a trip through Ancient Egypt with the Queen’s butler in Hitler’s private train.

Other widely-held community values are supported on air at the ABC, as with the traditional outside broadcasts for royal visits or Anzac Day. Even these worry some of the audience, who always have to be kept in mind.

By contrast, putting over private attitudes and beliefs of the broadcasters is always an irritant and unauthorised. A weakness easy enough to monitor is journalists opening themselves to briefing by political operatives with whom they share some sympathy. It stands out where, for example, some State government failure is “revealed” and the Opposition leader is popped up immediately on cue. Another such dodge: giving free-kick interviews to one party, adversarials to the other. This column proposes to take a look at that phenomenon, to put a monitor on some national radio, and reporting on ABC television news in the lead-up to the Queensland election in October. Please watch this space.

This is the second of two reports on today’s ABC by Lee Duffield, a former long-term broadcaster on the service and Journalism academic.