ABC SETTING A STANDARD OF FAIRNESS

The ABC Charter contained in legislation has the keyword “comprehensive” programming, always read within the organisation as its cue for employed broadcasters to be open to competing views and interpretations; media for all not for some, a standard of fairness.

Not that the professional broadcasters always succeed in keeping personal biases out of it, but it is part of their work contract making them accountable. It is a recognised mark of professionalism to know how to keep order in your own mind, enough to meet that standard. How else can they run a national broadcaster? Watch out for trouble if the ABC, lacking staff of its own, starts handing out air-time to individuals or groups from outside.

It has plenty of signature or celebrity-type ventures in its history, even now sharing a clutch of presenters with the commercials, viz Walid Ali and Hamish Macdonald (picture) going on Channel 10. There have been epicureans like the late Alan Saunders (picture, middle), the bushie Ian McNamara (picture, “Australia All Over”), priests, psychiatrists, other medicos, music afficionados, anglers, motor-heads, gardeners, on and on. But in each case some tension must be resolved between the demands on a professional broadcaster, to meet the standard, and the natural tendency of lay broadcasters to think it’s “their” program and try to indulge a preferred line. 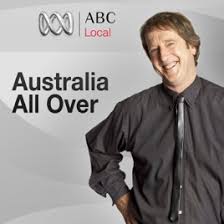 There is scope for this among many of the 450 community radio services which do great work providing for local neighbourhood or district communities plus special interest groups – but not on the national broadcaster.

That is especially true in the super-sensitive zone of journalism that takes in sport or rural affairs, more especially news and current affairs. Pressure from special interest groups to negotiate dedicated air-time for their own use means a threat to best practice under fair dealing.

A model for that is the radio program Counterpoint. Conservative interests felt wounded and scandalised that their side was not getting enough free kicks; there had to be a “counter-point”, a show broadcast on ABC but done by themselves. The current presenter, inheritor of the deal, is none other than Amanda Vanstone (picture), the Liberal Party Immigration Minister from the days of “toughening up” on undocumented migrants, and scandals over cases like Cornelia Rau. The show has interviews with book authors, she gives little homilies and plays her own kind of music. The program appears well resourced with support personnel. The question about it as an initial ABC capitulation to menacing pressure from the right wing, is its occupation of air-time, not available to the actual broadcasters to use, nor to other sources of opinion. There is no “counter-Counterpoint”, hosted by a Julia Gillard (picture), Richard Di Natale or Greg Combet, for example.

Also in radio is the American element represented principally by Tom Switzer (picture), Director of the Centre for Independent Studies, hosting a show called Between the Lines. The promise of the title is a let-down; it is an orthodox interview show providing interesting but not arcane material. An academic of American and Australian background, initially from the US Studies Centre at Sydney University, Switzer has evolved a step away from the personal to professional; from a partisan chat-show man, suitable for Fox News, on very familiar terms with his right-of-centre guests, more towards a broadcast professional mode. Earlier on we would hear some gratuitous asides about inherent failures and fallacies of “socialism”, or blessings of deregulation, and the like, mostly belayed now; he has been learning to pull his head in as every ABC broadcaster should.

The problem with handing over this air-time is again one of agenda setting and blocking-off. As said it can be intelligent material, though now and then some Trumpish American or Republican relic of the Nixon-Kissinger days is slipped into the line-up — not an egregious sin in a tolerant society. If there is a line, it is giving time and privileged attention to the anti-China campaign coming from the American right. This is a concern, where we hear, for example, that arms manufacturers are funding conservative lobbies barracking for a tough line against China. 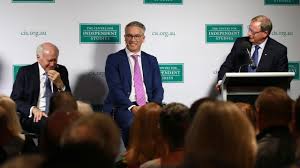 The Centre for Independent Studies is a neo-liberal and stridently anti-communist lobby, where the end position in any discourse is known in advance. As such it is not a research institute running curiosity driven projects dedicated to finding new knowledge for its own sake. It strives to look like that, publishing reasoned and informed commentaries – but cannot be what it is not. Switzer routinely confesses the link when he puts up a CIS speaker, but it is not enough. He needs to resign from his presenter role at the ABC, where he might still remain as an interview subject for stories about the CIS, as a spokesperson for US-based right-wing libertarian politics, or with caveats, on American issues generally. Alternatively he might stay on in his present role at the ABC, under the Charter, and resign as Director of the CIS. There remains a question as to who at the ABC permitted this unjust and unsustainable conflict of interest. What were they thinking?

A counter-point to the observations on Switzer, is the enduring performance of Philip Adams presenting Late Night Live. The guest list strays towards the left wing, made up for by quality of discourse, with usually distinguished speakers; by basing the agenda on the week’s news; and by employing Adams’s ability, through a long time in journalism, to keep himself out of it – murmured sympathetic responses here and there, but head still pulled in, no sermons on his own account.

Monitoring of ABC radio over the last four months has produced a few more instances of Americana. One voice, Salvatore Babones (picture), an Associate Professor in Sociology at Sydney University, devotes much of his time, and his publishing effort to China’s expansionism. Formerly from Pittsburg University, he is billed as also an “Adjunct Scholar” of the Centre for Independent Studies, a facsimile of the kind of title found at research centres. The professor’s core academic expertise is in methodology for quantitative sociological research, though he has moved on from this unsexy field into global economics (self-advertising as “Australia’s globalization expert”), and by further extension, sinology – the battle of China. He says he has discovered an “interpretative” quantitative methodology, which perhaps provides a rationale for shifting across from his home discipline into others.

At the third base, China, the gentleman’s published record demonstrates industry, producing day-by-day polemics, though not in the deep zone of scholarship found at first base, his academic discipline, e.g. not such as language study for work done off Chinese documents. He does not come up under “China” among the sinologists on the University of Sydney “Find an Expert” service used by journalists. Introduction to the Australian news media has been through some other channels. There have been outings both in conventional media, especially the ABC, and on the partisan side: talking with Alan Jones on radio, the Australian, Quadrant or The Spectator. Associate Professor Babones is openly an ideological warrior from the US school where liberal thought is a dirty word:

“The election of Donald Trump and the Brexit vote in the UK have caused fear and panic among liberals worldwide. They argue that the populist backlash represents a dangerous new authoritarianism. But what if the really dangerous authoritarianism is in fact their own? …”

Another player in from the US Professor Gigi Foster (picture) at the University of New South Wales has been co-hosting an ABC radio show called The Economists with the economics journalist Peter Martin — contemporary economists talking about the concerns of contemporary economists. Theirs is a discipline given over to neo-liberalism and unquestioning commitment to constant economic  growth. An actual critical program focused on the problems with economics, and the professional and academic discipline living off it for the last 50 years, would be useful for understanding the current world situation; but plainly not a job for present-day economists, too close to the flame. (If the ABC has to have an advocacy program, how about some others to balance-up? The Communists, The Keynesians, The Ecologists, The Humanists …).

On 28 May a guest on the show, an Australian economist in America, Justin Wolfers outlined his co-authored textbook on principles of economics, brain-teasers for first-year students, and complained about objections being made to doctrinaire economic thinking: “Poets and philosophers piss on us as low level social scientists because they have fancier dinner parties than we do.” Actually it is more likely disdain for their role providing intellectual cover for rapacious business corporations that employ them.

The insistence on growth being utterly necessary to the neo-liberal economy, is a potentially mortal problem for this discipline, as it is foundering now on climate change and exhaustion of the planet. No Earth means no growth so no neo-liberalism. With no definition of prosperity ever imagined apart from getting more money, both presenters have pulled out the innovation line. The environment will all be alright because of growing efficiency, productivity, and emphasis on services instead of manufactures, and can’t be stopped anyway: people “continually innovate and want to accumulate more stuff”, said the professor — so what can you do?! While understandable that they have a heavy personal and professional investment in the financial ideology, such an argument ought not be put without actual demonstration of how all that innovation is defeating the environmental crisis. They would need to address the stack of information documenting the enormity of the environmental crisis, as well. Once again, personal positions against professional broadcasting.

WHAT VALUE A “STATISTICAL LIFE”?

Like most lay persons dabbling in media Foster wants to teach, recommending the study of economics as the key to life, as a series of calculations matching opportunity, benefits and costs. She had to be the one to propose the Bolsonaro-Johnson-Trump response on COVID19: deny or do nothing, or at least don’t let medical measures prevent keeping the economy open. Here the beloved systems theory definitely needed some data to back up the argument. Information on the current death toll is actually challenging the idea that the two strategies, “prioritise lives”, and “cop the losses”, can be separated at all – in the world of facts once they rush to open the economy too early new deaths start crippling the economy. The assertion brought some notoriety but as they say in neo-liberal circles, the lady was not for turning. Invited onto the Q and A television program she placed an ad for “her” radio show, and asked them:

“Has anyone thought about how would you get a measure of the traded lives when we lock an economy down? What are we sacrificing in terms of lives? Economists have tried to do that and we try to do that in currencies like the value of a statistical life … we are still potentially better off not having an economic lockdown in the first place because of the incredible effects that you see not just in a short-run way but in many years to come.”

That’s a great talking point for a studio guest, but a contentious assertion unsuitable for a broadcaster presenting a program on our ABC.