Sending Away the Cruise Ships: ‘love boats’ or ‘pirates’? 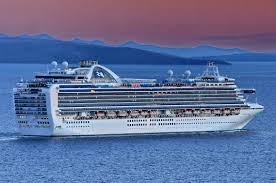 The criminal investigation by New South Wales police, and previously announced State inquiry might unravel the Ruby Princess scandal, and might even expose other problems with these super-liners.

The departure of five cruise ships from Sydney on Sunday night (5 April), told to go by State authorities, with two more sent off from Perth, partly relieved  a problem feeding into the national crisis. The main one in the story, Ruby Princess, carrying COVID-19 among its crew, stayed on at Port Kembla. On 19 March it put 2700 passengers ashore in Sydney, waved through without checks. Some 600 have developed the disease, eleven have died, out of 37 deaths in Australia as a whole.

RESPONSIBILITY – FOR NSW AND FOR PETER DUTTON

The New South Wales health department has been copping blame, but critics, including the federal Labor Opposition, have been asking about the national Border Force. This para-military body was composed out of the former, civilian, customs and immigration departments, and like-it-or-not, it has taken on their responsibility. If a ship is coming in from international waters, certainly with one or more foreigners on board, surely the border force has to handle it – or the country is unprotected.

The Home Affairs Minister, Peter Dutton, was himself down with COVID-19 earlier on, but has to answer if there was no replacement minister when the ship came in. The Opposition spokesperson in the field, Kristina Keneally, says the minister has gone too quiet, so is asking:  “Where is Peter Dutton?”

The bulky, moving shape behind all this, the Ruby Princess, is a beguiling figure: a scene of great pleasure to thousands of laid-back or party-minded travellers, deceptively dangerous as a harbourer of the disease — and from a questionable family background.

It is a leviathan of 113 561 gross tons (GT), American owned, registered in Bermuda. Its Princess Line, and the Carnival Line with which it is affiliated, have 45 very large ships, 28 of them over 100 000 GT. Several more are on order at shipyards. Their leading rival Royal Caribbean operates 26, including four ships over 225 000 GT. All but a few of the mega-ships over 100 000 GT were built after 2000; they are a 21st century phenomenon. Royal Caribbean’s Ovation of the Seas which carried over 80 CORVID-19 sufferers into Sydney Harbour on 18 March, is swank and near-new, built in 2016.

These vessels are representatives of a vastly expanded world cruise business, until this month worth an estimated US$45.6-billion, one that was already getting something of a bad name before COVID-19.  They would have hundreds of thousands of holiday-makers afloat around the world’s oceans and coasts at any moment.

NO PIRACY ON THE HIGH SEAS – THIS IS MARKETING

The business is a product of American marketing ingenuity tracking the desires of prospective customers. These vary from revellers looking for a bacchanalian blast in floating dance palaces, to family fun groups, to retirees wanting to visit exotic places with a clean room every night and no hassles getting about: a late-in-life visit to Alaska, Iceland, Papua New Guinea or Antarctica made easy.

The companies took advantage of new shipping technologies, following on from the 1970s super-tankers and later container transports, to create economies of scale. They took advantage also of loose financial laws that allowed them to skip tax by registering the prime assets in foreign ports – usually Panama, Bermuda, the Bahamas, Malta or Liberia. Hong Kong too is offering the tax breaks. They could therefore keep down prices, as with the Carnival slogan: “More than you’d expect for less than you’d expect”. The heavy advertising makes them a household name.

Carnival founded in 1972 made a breakthrough pitching to a younger market for which the large ships were ideal. Most of the cruise companies feature slick management, offering free air trips to port cities, cabin upgrades and loyalty schemes. Bent on expansion they have been financing harbour works, as in Brisbane, Australia, to open more ports, making them big and deep enough to hold the new ships.

Carrying passengers not massively heavy cargoes the ships can be constructed with high top hampers, the stacks of balcony decks like a high-rise building. Appointed for great times, catering generously, providing pools and rides, nightclubs and casinos, they took up an already known taste of consumers for romance and extravagant times at sea. They fulfill a desire for fancier accommodation on holiday than at home. Like their luxuriously appointed historical model, Titanic, they are an inspirational phenomenon, with lurking hazards.

TROUBLE AT SEA AND ASHORE

There has been trouble as would be expected with such gigantic and heavily populated floating assets. Apart from outright sinkings, like the Costa Concordia which ran aground in 2012 killing 33; these are some incidents and instances from lists compiled by international cruise watchers:

Resistance to the courts raises a key worry about corporate cultures and probity where the actual business model is hinged on a big-scale tax dodge. In the Sydney case the Minister, Dutton, accused the shipping lines of lying about coronavirus on board.

The companies stalled over moves by Australian port authorities to send the ships away. Facilities in Australian cities — harbour space, refuelling and provisioning, discharging sick personnel – are better in a crisis than most ports on their itineraries. Likewise the United States, where dozens of ships have been trying to dock in Florida. The practice of buying reserved berths where the companies invest in harbours means that they will become even harder to shift.

GO BACK TO YOUR (TAX HAVEN) HOME-PORTS!

Trying to send them back to home ports can be an awkward idea, where they do not actually have home ports, only tax havens, on paper. Yet it is not too much to ask, that they do go to the expense of sailing to these places, to wait out the world crisis. At first glance some of their ports, like Monrovia, Liberia, look pitifully small to accommodate too many heavy-displacement hulks.

Elsewhere, money has gone into most flag-of-convenience locations, boosting their credibility. Bermuda has a natural anchorage with special infrastructure, three cruise ports, good for normal traffic, maybe exposed to pressure if they all turn up. The Bahamas now boasts one of the world’s largest and deepest man-made harbours. Extensions to the Panama Canal have been done specifically with the cruise liners in mind. Malta, today a major transhipment centre in the European Union, might have space for some extra love boats in its large container port. The world’s 50 biggest container ships, all built in the last three years, all measure at over 200 000 GT; so in difficult times there should be a place for stray super-liners in their purpose-built harbours?

Empty cruise ships may not do so well with shore services during emergencies at some of those ports – not Australia’s concern. If they are not in port on regular business, it does not look cruel to send them home.