No end is in sight for the debate about Israel Folau’s right to promote his fundamentalist Christian ideas, writes  Lee Duffield.

Who might remember at all the funny take on the Olympics by the late comedian and sports-hater Robert Morley (picture)?

He used to proclaim:

Such a confusion of ideas has been kicked up by the “Israel Folau affair”, that it has become unignorable — be you interested or otherwise.

The rugby millionaire and fundamentalist Christian Israel Folau (picture) won’t accept his sacking by the Australian Rugby Union for breach of contract terms. 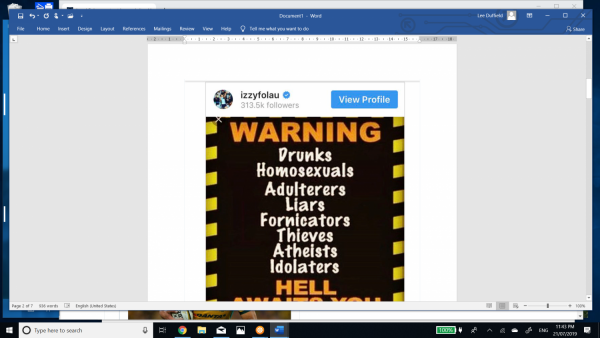 He had posted a tweet saying gays should repent or go to hell, which was held to be against a contract requirement, to go easy on such preaching.

With two years left on his contract, it was expected he’d keep starring for New South Wales Waratahs and representing his country on the international stage.

Out came a bunch of supporters ranging from radical-right “libertarians” to the religious right wing, advising and assisting with a big-money whip-around — to fund his resistance through to the High Court.

The News Corp publication, The Australian, has pitched in with a full-on media campaign; this week projecting a fresh legal twist, on a theme of undue influence, over claims by the ARU that its commercial sponsors would prefer to see him go.

How much say should corporations have?

WHERE DOES THE MONEY GO?

Some lawyers agree that Folau’s lawyers might receive all the monies donated, which is building towards three million dollars – but others think Folau will get out with a healthy surplus.

That’s not to say he would or could keep the change. Maybe it’ll go back to donors, to charity or the missions.

On the other hand, a job contract can restrict one’s conscience and enjoyment of life.

With industrial corporations today prone to take up social causes and prone to impose all manner of “extramural” demands on employees’ daily habits (for example work 65 hours a week for no extra charge); employees can be under pressure to sell off their civil rights, even adopt certain opinions or conditions for the sake of keeping a job.

Here is an example of where this can lead: the experience of my own Great Great Aunt, Tryphena Sparks (pictured), aged 19 in 1870, in England training for a precious and ultimately successful career as a teacher.

A friend sent her, out of levity, a list of “don’ts” on behaviour, satirising the prevailing strict “moral” codes actually being written into young teachers’ job contracts in those days. (The list was dug up by the literary scholar Robert Gittings).

These infamous contracts actually would be more severe than the “joke” version. They were mostly about sexual repression, documents indulging Victorian moral panic at the prospect of young women getting to enjoy sex — which we might say have some echoes in the tracts being put out by Folau and his allies on the religious right.

‘Never go out alone’, it said. ‘If you go for a walk with a young gentleman always leave at the corner’; ‘always wear a bonnet on Sunday’.

MATTERS FOR THE HIGH COURT

The contest about Folau appears to be between his contractual obligations and the protection from dismissal based on one voicing their religious commitments.

The millionaire footballer, Israel Folau, will have at his disposal a phalanx of legal advisors and cashed-up political associates.

They want him back with the Wallabies (pictured, facing-off against New Zealand), and as ideologues they want him to make their points.

He is unlike the novice teacher of Victorian times, entering one of few areas open to young women with little money – pressured to accept intrusive and bullying terms of employment.

Folau was not in a vulnerable position with respect to his conduct. Accordingly, he can be expected to understand and abide by its terms, as well as the ramifications of breaching them.

He had been warned about the meaning of the ARU policy over a previous incident and he signed on from a position of some strength.

Folau is a businessman with several alternatives. If he really wanted, he might well have been able to switch codes, given his strong background in Rugby League and AFL football before going to Rugby Union.

As his sermons on video would indicate, Folau is a sufficiently articulate man of mature age, at 30. He is well and truly able to understand what he signed up for.

The existence of very widely accepted, enduring, legislated constraints on speech, especially speech with consequences that can be classed as action, pours cold water on the wild idea of say-anything-you-want. Consider laws on defamation, obscenity, state security, constraints on reporting of parliament or the courts. These can be, and often are distorted, but like it or not they exist: lawful boundaries on speech-with-consequences are nothing new. These get traded off against implied rights of free speech.

Going even to this shallow depth of argument suggests there might not be too much to discuss in juxtaposing this particular sportsman’s contracted obligations with rhetoric about limitless rights of free speech.