The shooting outrage in New Zealand on Friday 15.3.19 put a focus on anti-immigration, anti-Moslem ethno-nationalist movements in many Western countries – but it’s a question whether it will break their support. 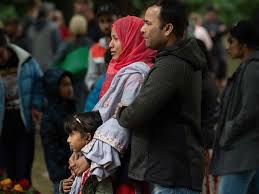 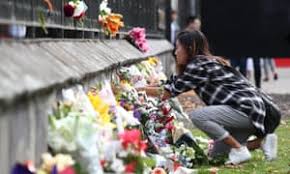 Gangs of, mainly, young men as the shock troops for these ethno-nationalist movements can be seen in two ways: from the personality angle and from the political ideology angle. Connectors between the two aspects are the internet and guns.

The key facts on this attack put together the terrorist act itself and media: a 28 year-old gunman shot dead 50 worshippers in two Christchurch Mosques during Friday prayers, injuring 50 others – and live-streamed it from a head camera.

He committed the main acts at the Al Noor Mosque,  went on to the Linwood Islamic Centre, and then was intercepted by police driving in the direction of a third Mosque and a children’s centre.

A memorial service on 29.3.19 attended by an estimated 20000 people took place at Hagley Park adjacent to the Al Noor Mosque.

REGULAR ON THE INTERNET

State authorities confirmed that the attacker was a regular user on social media, engaged with extremist anti-islamic sites, and well stoked-up with information on historical conflicts between Islam and the West – for example scribbling graffiti on his weapon about the 1683 Battle of Vienna between European forces and invading Ottoman Turks. He posted his “manifesto” of objections to Islam on the 8 Chan imageboard website, notorious for hosting extremist groups, then posted links to the murder video.

Taking on Islam as an “enemy within” that penetrates through immigration is sustained by heavy immersion with online messages, always hostile and mixed with hate speech and tales of violence. The long hours spent on the screen, hostility, and eventual preoccupation with confounding this “enemy” make a connection with what is known about trolls at work disrupting the internet.

Ginger Gorman in interviews about her book Troll Hunting pictures the majority of her interview subjects as young men coming out of a childhood marked by neglect and isolation, typically left alone for hours with the computer. She talks about an incidence of mental illness with pathologies including sadism and narcissism.

So we grasp the combination: a strong media feed, a story of conflict and threat; a weak register on the part of the user between the world of real relationships and a world more like video games –apocalyptic conflicts and heroic fight-backs.

Add in a simplified and immature way of recognising people in the real world, like making a different skin colour and outward appearance be the primary identifier. It makes for an ingrained racism resistant to influences for change — influences like psychologists who might suggest “trying to get to know” the other party in order meet an understanding.

Add in more: failure of imagination which an isolated life can produce, compensated only a little by the hyper-stimulus of gaming. When it comes to malice, cruelties like the suffering inflicted on the Mosque congregation in Christchurch, we encounter the same explanation of why prison torturers do it without pity: unable to wholly imagine the feelings of their victims.

Firearms and explosions are a prime kids’ way of obliterating “bad guys” like in video games. Dealing with a perceived adversary in a patient and persuasive way is too much of a complicated and difficult feature of the real world of adults. That is how guns that make you feel ten feet tall become a favourite thing.

A punching incident this week between Australian Senator Fraser Anning and a youth who broke an egg on his head was indicative. The politician, not elected but co-opted to fill a parliamentary vacancy by an extreme-right party, was attending a gun show.

The pattern on the alternative or extreme right is that firstly, the ones who enter electoral politics mostly work to be seen as respectable and legitimate in the main stream, and secondly, there’ll still be the black-shirts aligning themselves out on the fringe.

In Australia small radical-right parties like One Nation, and a putsch within the governing Liberals, make occasional rhetorical outbursts but stop at outright incitation to violence. They will promote the right of extremists to spit out any invective – blurring the distinctions between free speech and hate speech – and will take up some aberrant policies like undermining gun controls. Meanwhile the Alt-right troopers, the “boys”, stage “events” at beaches where black immigrants go, or at gun shows, or to try and block the construction of a Mosque. Through the internet the movement produces figures like Brenton Harrison Tarrant – accused of mass murder this week in New Zealand.

In the United States radical right-wing Republican politicians tinker with electoral boundaries and block firearms regulation; at the rough end the gangs of “boys” stockpile arms and do torchlight parades; their President, Donald Trump, gives an avuncular wink.

The movement is strong in Europe where the system of ideology-based parties and rule by coalition in most countries has enabled several to take part in government. Parties like the French Rassemblement National, Austrian Freedom Party (FPO), Danish People’s Party (DF) and Flemish Vlaams Belang (VB) regularly get 17-22% in elections – promoting ethno-nationalist sentiments and working on anxieties over large-scale immigration. A researcher on the movement, Haydn Rippon, has demonstrated the drive for respectability of these parties, through their insistence that they have no connection with dishonoured fascism from the 1940s. Against that, on the dark side are radical groups in the street, and on the internet, and the glaring case of Anders Breivik who Killed 77 in Norway, mostly children at a Labour Party youth camp — and was quoted in the “manifesto” published by Tarrant.

Similar analyses as these can be applied to the motivation and behaviour of Islamist terrorists who have generated substantial mayhem, with the “nine eleven” attacks on America in 2001 and several murderous events in cities of Europe.

The recruitment of isolated or socially excluded minors from migrant communities through lurid social media offers them a chance to break out and be part of “great events”. Defensiveness about identity, up against majorities that appear threatening and different, looks similar to the racist impulses of the Alt-right bovver boys on the “other side”.

Again there is internet abuse, and fascination with weaponry and war link to justification through political ideology, in this case a radical jihadism warped out of Islamic teaching. In the way it works, does it not look like the ideology of ethno-nationalism in the United States, Europe, and Australia and New Zealand?

In further comparison, non-combatants everywhere are the same, regardless of religious persuasion, wanting peace and freedom from the oppression of random terror. Events of the week in New Zealand have provided evidence of the solidarity of the community overall with the Islamic people made into victims – new citizens who deserved better protection. That power of love might be a clue as to what can be done eventually with the “boys” in black military costumes with guns, in the longer term – hard study required.

Actions of the New Zealand Prime Minister, Jacinda Ardern, have given an example, demonstrating compassion towards the sufferers, and seizing the moment to strike at the core problem of guns. New Zealand rolled over enthusiastically to American neo-liberalism in the 1980s, “de-regulating” on a major scale, and retaining a poor standard on firearms law — change always successfully resisted by the country’s right wing. The Prime Minister’s plans to legislate for tougher controls should be hard to stop this time.

Tarrant as a licensed shooter was able to buy five weapons and ammunition without having them registered, some obtained on line from Gun City, “the world’s largest gun store”. The main one was a Colt AR-15 semi-automatic rifle, the type most used in mass shootings in America.

Ardern found space as well for a dig at Australia, certainly aware of some resentment in the community that the accused murderer had come from there. She has suggested that upon sentencing he might be deported to Australia. Previously she has objected to the Australian practice where resident long-term New Zealand expatriates guilty of crimes in Australia are deported “home” at the end of their gaol sentences.

A footnote on mainstream mass media, which when it turns out in force becomes a valuable resource, for information, essential services and provision of scope for reflection and sound commentary. These media, New Zealand and international, working out of Christchurch have functioned as a plenary zone, one place where all could go and be assured the flow was accountable and reliable. They came up with resources and professional handling called for in the crisis, and although there were many, it was not confusing for audiences. The Australian journalists’ association, the MEAA, has actually published information of efforts to improve coverage by the professional media, less hysterics, more responsibility. Online and mobile as a carrier does accommodate such services, but also runs mountains of rumour and trash, at worst trolling and fake news — confusing and potentially dangerous. After all, when it comes to mass murder during prayers, this is serious.