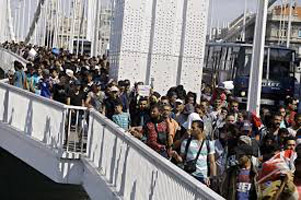 Thousands this September, crossing Hungary’s frontier into Austria, replayed the events at the same place in September 1989, with a clear tinge of  irony.

Then as now it was a desperate rush to take advantage of an open frontier, to be received with open arms, moving on to find protection and freedom in Western Europe, writes Lee Duffield.

This time it is part of a wave of several hundred thousand mainly escaping from the war in Syria. Officials and journalists at the frontier this week estimated 10 000 in one day.

It eclipsed the record of last time as Europe’s biggest population shift since the Second World War. That time it was people from Eastern Europe itself, most from East Germany, shucking off the paralysed hand of Soviet occupation.

They had been through some desperate moments, crowding into precarious safe havens like the West German embassy compound in Budapest, as government leaders from both sides met to discuss what to do.

It all had an unsettled air, the border crossers mostly young people, many with small children, travelled on from Vienna to temporary German Red Cross centres at such places as Passau on the Danube, near Munich, before moving on to re-settlement elsewhere. More deja-vu.

The ‘reform’ communist government of Hungary, among the least communist-inclined for several years, then, as now, had come around to letting the people go.

Well within a year the Eastern Bloc states, Hungary among them, had realised their first demands, “communist party out, free elections”, and were working hard on the next: a market economy, within a united Europe.

One of the great shocks and surprises to Western Europe was the strong demand backed up with a determined public opinion for entry into the then European Community.

“All meetings from December 1989 into 1990 confirmed this inclination to prepare for membership… Forget previous relationships … They wanted to be part of the West. People on the street in those countries know the future depends to an extent on Brussels. That is the main thrust”, he said.*

To correspondents at the time, like me, people in the street made it very plain, along these lines:- “We are Europeans. We are part of European civilisation. We are not from Russia.”

Moving forward these 26 years, the project has seen the realisation of many such aspirations: freedom for East European people at last to cross open borders; to move to the West to find work; open markets for the country’s products, and support with infrastructure; a hard currency which, the Greek experience notwithstanding, national governments work hard to get into; and in times of dire trouble, like a Global Financial Crisis, or dangerous moves across the border in Russia, bigger partners can provide some help, be it credit or joint security. Bulgaria and Romania, evidently leading furnishers of gangsters for the current trade in people, have had decades of EU assistance at official level in the long battle to shut down organised crime.

The government in Budapest had realised on a ‘good idea’; to cut with the Soviet Union, but shun isolation and go into the EU.

Maybe now, they have taken up another ‘good idea’, of this kind:- “Signed up with Europe we may be; we take the economic side of it and the free travel for us, but we won’t take all these Arabs and Afghans scrambling over the fence.”

It raises a question about the EU architecture and the amount of commitment to it, of this kind:- “It’s a new kind of government, signed up for good or ill, to keep the peace and mobilise the resources of the continent. Are you in, or not?” 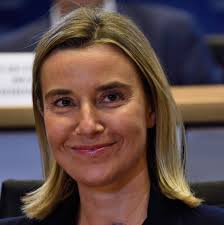 Federica Mogherini, the High Representative, ‘foreign minister’ of the EU, meeting the member state Ministers at Luxembourg on the weekend said it was time to wind up the equivocation and disputes about whether or not to take in refugees, and work on arrangements for handling the problem.

After all the EU has a treaty mandating what all have agreed on, for member governments to register asylum seekers on first arrival; something breached in the rush of the recent days.

“It is time for the blame game to end, it is time to turn decisions into action, as Europeans together”, she said.

The European Commission, and the government of Germany as the main safe haven, taking possibly 750 000 in a two-year span, now demand a settlement where all EU governments accept a quota for asylum.

They’re pointing out that the decision to open the frontiers can hardly last; if 100 000 come in the present emergency, at least 100 000 are likely to follow.

It cannot be easy.

The crowds on the march present a clear image of despair, and also raise some confronting problems, like, unquestionably to many Europeans watching their evening television,   the ‘boys’. Large groups of aggressive young men of military age, at least not fighting for terrorists or the Assad regime, insist on going to Germany or nowhere; as if:- “When you cannot stay  there, you must go to live in the richest country”. Huddled masses, seen also storming police lines and chanting their demands.

Plain to see, immigration can blow up as a fraught issue very dangerous for politicians.

Viktor Orban, Prime Minister of Hungary, anti-immigration himself, knows his conservative electorate, lining up with his counterparts in Poland, Slovakia and the Czech Republic to refuse any settlement of arriving refugees.

“They want to go to Germany”, he shrugs.

His officials have managed the new-arrivals in curious ways, trying to keep them out, then when they arrive, trying to get them into crowded camps, not letting them go on to Austria. That might have been an attempt to honour the EU obligation to register arrivals, but by September 2015 the numbers had got out of hand – at the frontier, in the railway stations, along the highways leading to the ‘West’.

So the waves of marchers were set free to go; reporters along the highway saw them encountering local citizens, some giving food and water, others jeering to hurry them along.

In Australia, Prime Minister Tony Abbott began his week urging European leaders to take a leaf out of his own book and “stop the boats”; asylum seekers arriving independently, on leaky boats, are automatically denied any entry and sent to holding camps in Nauru or Papua New Guinea. 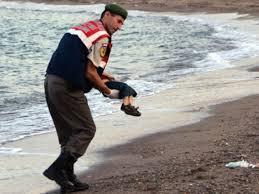 The sudden blow-up of a humanitarian crisis, with more drownings off the Mediterranean islands, people suffocated in sealed lorries or in the holds of fishing boats, caused a turn-around in Canberra.

Night protest vigils had been building up in  support of a compassionate response.

The government determined to make a show, despatching a Minister to Geneva to see the United Nations about taking in possibly 10 000 of the Syrian refugees – but only within its present refugee quota.

The Labor Opposition said the government response was belated, demanding that it “step up” to double the year’s intake to 27 000.

Behind its blind spot of rejecting all ‘boat people’, Australia supports ‘orderly’ intake from camps, claiming the highest per capita intake of refugees for settlement.

Government leaders have begun talking about privileging access for Christians fleeing the persecutions in the Middle East, (a possible sop to ‘anti-migrants’ among government supporters, as a dog-whistle for rejection of Moslems).

In other shifts, the United Kingdom government, ambivalent like Hungary in its commitment to the EU, has budged on refugee intake, saying it’ll accept 10000 from the current wave.