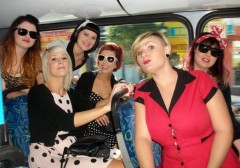 It could have been a scene from Johnny Depp’s classic ‘Cry Baby’ but instead it was the runway of Dolce and Gabbana’s A/W 10-11 show. Rockabilly attire is back in full swing and Queensland fashion gurus are not shying away.

With the number of Kustom culture festivals on the rise it’s no surprise Queensland has a case of fifties fever.

From Wintersun  and the Twilight Hot Rod Show to the newer events including Cooly Rocks On and Rockabilly Fridays in New Farm, Queensland’s fashion and lifestyle have been influenced by the runway.

A Brisbane based pin-up model, Bettie Butcher, says it’s great to see the youngsters at festivals dressed up in their finest rockabilly attire with their rocker parents and even grandparents.

“As it’s (rockabilly) becoming more and more popular we are seeing the younger generation embrace rockabilly due to the influence of their parents, grandparents, or peers,” Ms Butcher said.

With full-skirted dresses, high-waisted petticoats and bow fronted heels making their way on to the runway of Dolce and Gabbana and Louis Vuitton’s shows, stylist Charley Greenfield agrees rockabilly style is making a comeback in Queensland.

“Brisbane designers Lady Sveta and Fanny Bambini have both put a 2010 spin on rockabilly with their accessory designs,” Ms Greenfield said.

My Little Rockabilly designer Kat Creasy also creates accessories which reflect the fifties and says the scene is ‘alive and kicking’ with ‘class, elegance and style’ in Queensland.

“You only have to look at mainstream shops such as Target to see that vintage style rockabilly dresses are coming back in full swing,” Ms Creasy said.

Ms Butcher says although buying rockabilly fashion can be a little more expensive, it’s fantastic quality and you can get some one-of-a-kind items which really make you stand out from the crowd.

“It also depends if you’re going for authentic vintage which can be cheap if you’re willing to sort through op shops, but there are some great reproductions out there too,” Ms Butcher said.

Rockabilly is a fuse of hillbilly and rock’n’roll genres and many local musicians have taken to reproducing this sound and performing at festivals around Queensland.

“With festivals such as ‘Greazefest’ and ‘Cooly Rocks On’ rockabilly fans are able to get out and support local musicians,” Ms Creasy says.

For rockabilly attire in Queensland head to:

How Meow Jewellery (and accessories) – http://howmeowshop.net/