CityCycle scheme to be a success

Brisbane’s CityCycle scheme is gearing up for its October 1 launch, with many already hailing it as a success.

Commuters will able to purchase subscriptions which enable them to rent a bike from stations around the city.

Once complete, CityCycle will boast 2,000 bikes and 150 stations in inner city suburbs such as Newstead, West End and Toowong. 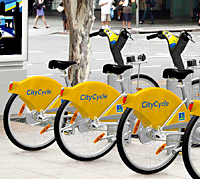 Stations will open in seven of Brisbane’s busiest suburbs on its launch with three more suburbs gaining stations next year.

The scheme is available for use by residents and visitors to Brisbane who are over 17 years old.

CityCycle is operated by JCDecaux, the same company behind the Paris bicycle revolution.

The Chief Executive Officer of the company, Mr Stephen O’Connor, said the goal of the scheme is to change people’s transport habits and for it to complement current public transport.

“To get them to use the scheme for short trips from wherever they may be going whether that from home to work or from work out to lunch.

“Also for it to be intermodal so for it to connect with other forms of transport that people can use to get from A to B.”

A health manager for the Heart Foundation Brisbane, Sheree Hughes, said the scheme is a fantastic initiative as it promotes exercise in people’s daily lives.

“At the heart foundation we are encouraging people to accumulate at least thirty minutes a day for decreasing their heart health risk so it’s perfect.

“It fits in with our guidelines.”

She said the initiative, which is a huge success in cities around the world, will be well received in Brisbane.

“It’s very affordable and the first stage of the scheme has plenty of stations for people to traverse across the city.

“So I think it will be well used.”

The scheme is not a new concept for Australia, with Melbourne already taking part in the international trend.

But Melbourne Bike Share hasn’t been as successful as was anticipated, with fewer than 70 trips a day being made on Melbourne’s 600-bike system.

Sydney filmmaker and bicycle blogger Mike Rubbo blames compulsory helmet laws and questions how they have been able to retain the laws when other countries have not.

Compulsory helmet laws have not been adopted in other countries after Australia introduced them in the 1990s.

Mr Rubbo said “good ideas tend to travel and this idea, that you simply must wear a helmet when you cycle has not.

“What does that tell you?”

But Brisbane’s Lord Mayor Campbell Newman has pledged to provide helmets at an economical cost.

He said to Brisbane Times recently “we’re looking at a target price point to be able to provide helmets to customers of the scheme for around $20 to $25 a helmet, that’s a pretty good deal.”

Councillor Newman hopes helmets will be available from local coffee shops and newsagencies near cycle stations.

Mr O’Connor said for those wishing to get involved as soon as possible, subscriptions are now open at the CityCycle website.

Annual, quarterly and daily subscriptions are available for purchase, with the scheme being considered one of the cheapest transport options available.