Brisbane commuters now have the option of a peaceful train ride to work as Queensland Rail (QR) in a trial of  ‘quiet carriages’. 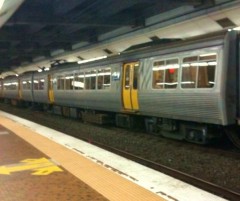 On trial: the last carriage on south-east Queensland trains will be a ‘quiet zone’. Photo: Kira Donohue

In the three-month trial that began on August 24, the last carriage on all trains in Queensland’s south-east will be ‘silent zones’ and passengers will be prohibited from using mobile phones or music devices while using them.

Queensland Transport Minister Rachel Nolan said in a statement that posters and announcements in the carriage would tell passengers about the quiet zone.

But while Ms Nolan encouraged commuters to follow the noise guidelines, she drew the line at prosecuting potential offenders.

“This initiative can only be successful through the courtesy and consideration of all commuters,” she said.

A QR spokesperson said the new initiative had been well received by customers so far and if a success, the ‘quiet carriage’ would be permanent.

“Following the three-month trial, QR will talk to customers and employees to determine whether the quiet carriage will be implemented permanently,” the spokesperson said.

“We encourage our customers to provide us with feedback throughout the trial.”

Frequent Gold Coast-to-Brisbane commuter, Taylor Booysen, said the carriage would make a “much needed” change to the noise levels usually experienced by passengers.

“I think it’s a great idea and one that I hope they make permanent,” he said.

“Nearly every single train I hop on has someone who disrespects the other passengers by playing their music too loud.

“This will give passengers the chance to choose not to listen to that.”

He also offered a future improvement for Ms Nolan to consider.

‘Now if we could only get some quiet buses.’

QR has introduced a section on their website for customers and employees to leave comments and feedback.

The trial will run in all south-east Queensland trains from August 23 to November 22.