A Brisbane Athlete’s Foot store has undergone significant renovations after it discovered the store was creating hostility amongst the customers. 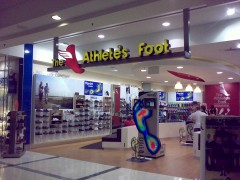 The original store at Indooroopilly shopping centre produced many issues that made customers feel agitated.

The store’s manager Brad said there was a “sheer lack of size” in the original shop.

The store had limited space and overcrowding was a significant problem.

The cramped atmosphere often meant the store would overheat.

Athlete’s Foot employee Mark Johnstone said that a drawback on the original sizing was that “when there was a group of people inside it would become hot.”

The store’s small entry way stifled air circulation. This meant that when the heat rose, the air inside the store became humid and trapped.

The layout of the store made it hard for workers to determine which customer was next.

Customer Donna Mary said it deterred her from shopping there.  She said the layout “made it easy for others to jump the queue.”

Staff admit this was a regular problem and noted that verbal arguments between customers would regularly arise as a result.

They believed the arguments were more prevalent in their store because of the size, structure and layout.

Studies into the relationship between environment and aggression agree with them.

Studies show that environmental factors such as crowding, noise and temperature are a major cause of aggression.

He said customer’s moods had lifted due to  “the increase of size and the improvement in the general atmosphere.”