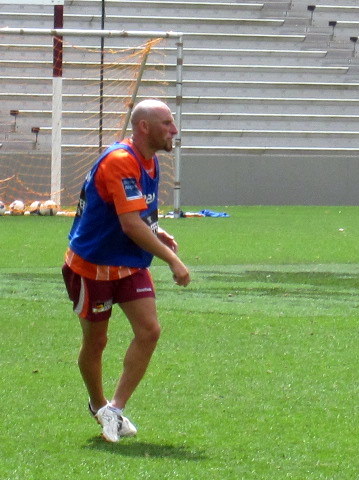 Danny Tiatto moved freely at training ahead of this weekend's fixture: Martin Cambridge

Brisbane Roar will welcome back hard man Danny Tiatto after he overcame a groin injury this week.

Brisbane will be hoping Tiatto is at his damaging best when they take on league leaders Sydney FC this weekend.

“We had to try a few things that didn’t quite work out for us,” he said.

“We have to scratch that now and look forward to next week.”

Tiatto said he was expecting a big performance from his team against traditional rivals Sydney FC on Sunday.

“After the performance last week all the boys are ready to stand up and be counted,” he said.

“We’ve had some pretty tight games against Sydney and I don’t think this will be any different.

“Sydney are a decent side with a good bunch of players who play decent football.”

Tiatto, 36, also said he would carefully manage his body throughout the rest of the season.

“Over the years I’ve pushed myself pretty hard and been alright for the weekend,” he said.

“These days I have to manage things a bit better. I’m not 20 years old anymore, although sometimes I think I am.

“I’m sorting myself out and I’ll be okay for the weekend.”

Brisbane Roar are currently fifth on the A-League ladder.

They will play Sydney FC at Suncorp Stadium this Sunday at 3pm.