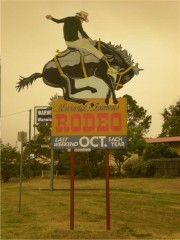 The Warwick Show Association cancelled the event a week before the RSPCA planned to approach them with concerns, following the animal welfare group’s successful bid to stop the event at the Mt Isa rodeo.

The Warwick rodeo is regulated by the Australian Professional Rodeo Association, which does not sanction wild horse racing or the tactics such as ‘ear biting’ used during the event.

RSPCA Queensland spokesman Michael Beatty said they see the cancellation as a victory and believe there would be grounds to prosecute riders for animal cruelty if it continued.

“We believe, certainly in the past there’s been clear evidence of cruelty to the animals in the wild horse races,” Mr Beatty said.

“We’re not now going to target anything else – it was that event that we felt we had grounds for charging somebody on the basis of breeching animal welfare law.”

Show Association secretary Diane Coy said the Warwick show would have been the only rodeo left in Australia to feature wild horse racing, leaving many punters disappointed.

“There will be quite a few people who will be disappointed – it was a big drawcard – but it was just something that had to happen,” Ms Coy said.

Ex-wild horse racer and South-East Queensland bullfighter Richard Murphy says those concerned with the welfare of the event were “ill informed”.

“Their claims of people putting horses in headlocks and biting them are true, however they never tell the reason for these actions,” Mr Murphy said.

“By biting a horse on the ear and causing a short sharp pain similar to a pinch, it induces the brain to release endorphins that greatly calm the horse. 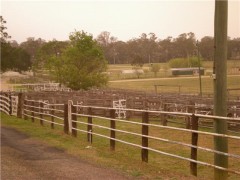 “When [the third team member] is up on the horse, the bite is released and the endorphins dissipate – the horse then bucks just like any other unbroken horse would.”

Ms Coy said preparations for the rodeo, which is scheduled for next month, would go ahead unhindered from now on.

“It’s the only event that will be cancelled – it was the only one they [the RSPCA] were really interested in taking out,” she said.

Mr Beatty said while the RSPCA was against rodeos in general, there would have to be tougher animal welfare laws put in place before they could question other events.

He said the “closest event” to being able to prosecute over cruelty concerns would be calf roping, where the rider lassos the calf’s neck, then dismounts to tie three of their hooves together.

“We still have some concerns with it, and even within the rodeo community you see ‘saddle broncs’ and ‘bull broncs’ who don’t agree with calf-roping either,” he said. 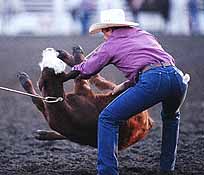 The treatment of animals in the Warwick rodeo has been questioned in previous years, and Warwick social worker Karen Hillier said she was appalled at what she witnessed at last year’s show.

Ms Hillier’s visit to the rodeo she labels “cruel” was business-related, but she and her colleagues decided they would not be going back in future years.

“It was dreadful – all the animals were standing out in the sun with no water or shelter,” Mrs Hiller said.

“You can’t tell me they’re being properly looked after on the day when they’re stuck in their little pens waiting for their turn to be terrorised.”

Mrs Hillier said as a social worker she found the “whole mindset of the rodeo wrong, and damaging, to have adults and children cheering when animals get treated this way”.

However, Mr Murphy rejects claims rodeo activities are harmful to animals, saying like other animals in sport, they have to be well looked after.

“They have to be in their best physical condition in order to perform at their best,” he said.

“The stock contractor makes his money from the ability of stock to buck, and if the animals are not cared for and fed well, then they will not buck properly.” 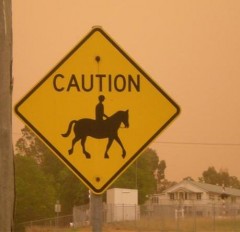 The tradition of horsemanship is 'important to country communities'. Photo: Karen Hillier.

Mrs Hiller said in Warwick, the rodeo now in its 80th year, was seen as a “Godsend”, because of how many tourists it brings into the area.

“You don’t admit you don’t like the rodeo in Warwick; everybody loves it because of how much money it brings in,” he said.

Mr Murphy said there are other reasons rodeo communities look forward to the event.

“It is a way of showing the skill cowboys had in the days before technology, and showing natural horsemanship.”

The Warwick Show and Campdraft will be held between October 19 – 25.

What do you think? Are rodeos cruel, or an entertaining tradition? Leave a comment below.