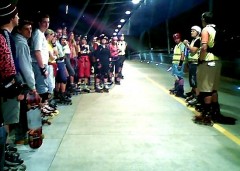 Monte Walker from Planet Inline tells the protesters about the ban: Ellie Freeman

Skaters are united in protest against a new Queensland Government law banning skating after dark.

State Transport Minister Rachel Nolan is introducing the ban because of safety issues and lack of visibility at night.

It will be in effect from October and police can fine offenders $40.

But a group of Brisbane night skaters who wear high visibility vests, knee and elbow pads and helmets insist they are safety conscious.

Planet Inline runs the Wednesday Night Skate through the city, following a European trend for social skating or bike riding after dark.

The group’s Monte Walker says it is a shame night skating will be banned.

“If [Rachel Nolan] was to come down and see us every Wednesday night, she’ll see a lot of mature, professional people having a good time,” Walker says. 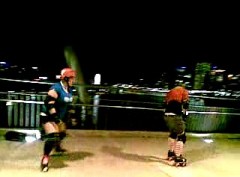 Although roller derby is usually played indoors, the Northern Brisbane Rollers sometimes take the girls on the road for training sessions.

“At nighttime if we go out, I’ll wear hi-vis clothing and all my protective gear,” Ms Pryor says.

“I’m conscious about people around me.

“I don’t think that it’s unsafe; I love skating at nighttime.”

Justin, a skateboarder, admits he “doesn’t have a leg to stand on” because he does not normally wear protective gear.

“It’s a confidence thing. We all know we can do it [skate],” Justin says.

“In street skating, it’s uncomfortable to wear a big helmet and pads.”

Justin is no stranger to the wrong side of the law. Police have arrested him for skateboarding-related offences at least three times.

But Justin says he would rather a law enforcing all skaters to wear protective gear rather than banning night skating altogether.

“As far as inline goes, they look like cyclists,” Justin says in regard to the padded-up skaters nearby.

“I don’t see how much more of a risk they’d be to safety than bicycles.”

Planet Inline is calling for anyone affected by the law to write letters to Ms Nolan.

Walker collected over 50 personal letters, some from tourists who support a European-style night skating scene in Brisbane. 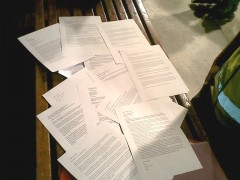 Skaters wrote their thoughts on the ban to send to Transport Minister Rachel Nolan: Ellie Freeman

Should people be banned from skating at night? Leave a comments below.