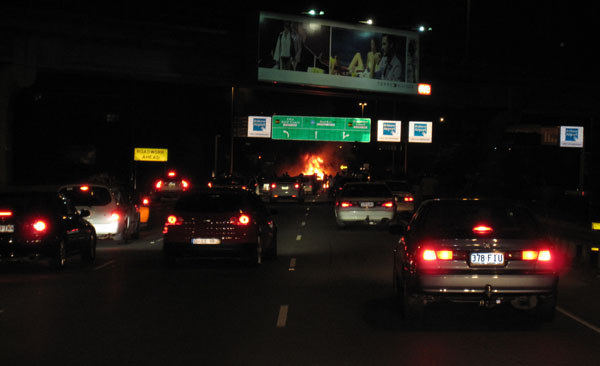 A car rear-ended a taxi causing a massive fireball just before the major arterial roundabout on Brisbane’s Airport Drive about 10pm AEST yesterday.

The taxi driver escaped unharmed, while a bystander managed to pull the driver of the other car from the burning wreck as more explosions lit up the night sky.

“We were just coming home from the airport when suddenly we came to a stop and the next thing we know there is a huge bang,” he said.

“At first it was obvious it was a crash and the next thing we know everyone is running in the other direction.

“Everyone reacted so quickly. It was quite scary, but at the same time it is a miracle no-one got hurt.”

Vehicles stretched back from the accident to the Brisbane domestic airport, with traffic delays lasting over two hours.