The technology, once exclusive to professional athletes, studies genetic coding to determine what exercise works best for individuals. 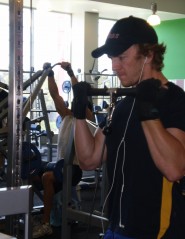 Exercise for your DNA: Anna Beresford-Smith

The product known as GeneElite involves a mouth swab which is sent to a lab for analysis.

ExcelGene general manager Richard Fahy says the test examines 15 set genes to determine how well a person burns fat, their ability to flush toxins and the rate in which they build lean muscle.

“The idea is to detect code changes between people if a person is not responding well to a particular type of exercise,” he says.

“For example, a person may jog every day but not see any results.

“The idea is to take the guesswork out.”

A full test costs $450, while an entry test which examines a person’s body fat and metabolism gene costs $140.

Personal trainer Diane Syrch says this could make it an unrealistic option for most gym-goers.

“It is hard enough for people at the moment to afford personal training, let alone an expensive DNA test,” she says.

However, Ms Syrch says the product has merit.

“One set method of doing things is not going to work for everyone and I do believe genetics plays a large role in how a person’s body responds to exercise,” she says.

Mr Fahy says results take up to three weeks and the DNA is “certifiably destroyed” once it has been analysed.

ExcelGene hopes to raise awareness about the link between genetics and exercise and is currently in negotiation with gym chains.

“Presently the trend in Australia is that there is a slow acceptance for global testing and information, caused by negative media coverage,” Mr Fahy says.

“However we hope to expand the knowledge of Australians about the reality of this kind of testing and shift perceptions to a more positive light.”