Round 24 of the NRL saw the Gold Coast Titans bank a home semi-final in what will be the club’s first-ever finals series.

The scrappy 20-10 win over the Cronulla Sharks was enough to ensure the club can finish no lower than third and still has a slim shot at the minor premiership.

Coach John Cartwright said there was only one focus throughout the week.

“With that game it was just important to get the two points to secure us a home semi-final. That issue is now beyond doubt. We have a home semi to work on,” he said.

While the win gives the Titans some breathing room, Cartwright believes for the Titans to do well in the finals they must build momentum in the remaining two rounds.

“We want to start getting close to what we see as our best side,” he said.

“We want to win the next two games. That goes without saying.”

Rounds 25 and 26 will be good tests for the Titans, facing a desperate Wests Tigers still clinging to finals hopes and fifth placed Manly at their Brookvale fortress.

Traditionally the top two or three teams have a relatively easy road in the first weekend on the finals, however the 2009 finals series will be vastly more competitive.

On the current ladder the Titans would face a rampaging Brisbane Broncos in a blockbuster local derby.

The Broncos have now won three in a row,  including the prized scalp of competition leaders St George-Illawarra and scored 40 points to zero in one half against eight placed Penrith. 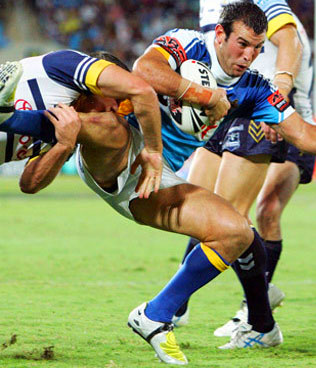 Luke O'Donnell is tackled has he barges over the line for the Titans: Liam Thomas