Supercars struggle to draw a crowd 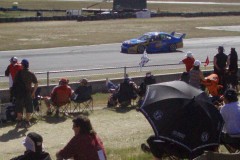 More than 64,000 people watched the races from the hill of Willowbank Raceway last year, but this year the crowd reached just 48,000.

Fans driving to Willowbank usually face long delays but this year traffic was light and the car park was only half full.

Organisers blamed the global financial crisis for lower corporate sales and the EKKA for the poor turnout.

But not even the 31 degree heat could keep die-hard fans away.

Snow cones and cold beers were the most popular ways for cooling down while watching Ford’s Jamie Whincup take the lead on Saturday.

Holden driver Will Davison took the honours in the main race on Sunday in front of a crowd that was 6,000 people smaller than 2008.