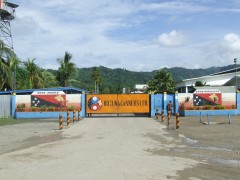 Controversy... Locals say they weren't consulted about RD Tuna's expansion plans and were blocked from protesting at the project launch

A big business and government plan to fence off 200 Hectares of land as an industrial zone for 10 fish canneries near the Papua New Guinea town of Madang has been slammed by locals who fear the impact on environment, employment and land access will outweigh economic benefits.

Local village man, journalist and academic, Patrick Matbob, says people originally gave their land to missionaries for development but expected it would eventually be returned.

The land was given to the government  instead and sold to the RD Tuna Cannery which already has a cannery in the area.

Mr Matbob says once the canneries are built locals will be locked out of the disputed land.

“From what we understand the place will be fenced off and you can only get in there if you have a right to be in there, like work or business,” he says.

Francis Gem, a landowner and Chairman of a shoreline conservation group called Idawad, which means “our voice” in the local language, objects that the community was not consulted and protesters were silenced during the recent launching ceremony for the project.

“We put up banners but the police and the security personnel came and took them away so we could not present our grievances and other issues that will be affecting us,” he says.

Mr Matbob says the local Provincial Governor has demanded transparency for the rest of the project and arranged public forums  — but there are few concrete answers from National government consultants about the impact of ten canneries.

“He [the consultant]’s still working on it. They said ‘I can’t answer your question until I’ve finished,’” he says. 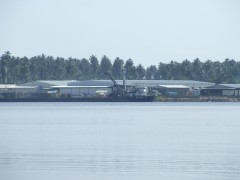 Expanding...10 canneries will be built behind RD's fishery at Alexishafen

“Obviously what he means is that until the ten canneries have been set up and we see the effects then we can know what to do”. 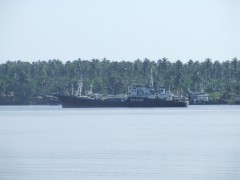 Sign of the times...Tuna vessels will use the lagoon to service the ten canneries

The environmental impact of tuna vessels in the lagoon will push local fishermen further out to sea, exposing them to

“When they occupy the lagoon we won’t have any fishing ground,” he says.

“So that means when we go out we have to risk our lives because of the bad weather [and] the high seas”.

The government expects to gain additional revenue rather than just licensing fees by having tuna boats process their catch on shore.

However employment for locals has been limited to cannery workers and bus drivers, with other work such as construction reserved for Filipino companies Mr Matbob says.

An anthropologist and Fisheries Researcher, Nancy Sullivan, warns that overseas workers can impact on more than the economy and has already affected communities interacting with foreign tuna fishermen.

“They [the tuna fishermen] were creating a small group of prostitutes really, women feeding their families by selling sex to get the fish they had every right to have anyway”.

Dr Sullivan says these women can ultimately be left holding behind holding babies without any financial support as the men have other families and are unlikely to stay around.

“Nobody in this industry is settling in Papua New Guinea”.

Despite the people’s lack of enthusiasm for the canneries Mr Matbob says the project is almost certain to go ahead as the Prime Minister, Sir Michael Somare, has already borrowed the money from a Chinese bank.

Dr Sullivan says if the project goes ahead it will kill Madang’s main tourism industries of fishing, diving and watersports.

“The big picture is idiotic. You’re shooting yourself in the foot,” she says.

Game fisherman, Dr Pascal Michon, says tuna fishing near Madang has already been affected by the presence of only one cannery.

The local conservationist, Francis Gem, says fishing is a traditional way of life key to survival.

He is downbeat about the future.

“When the PMIZ [Pacific Marine Industrial Zone] comes in then all the resources that we have now will die and that means indirectly our people will die out”. 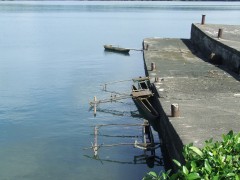 Heyday... Local fishermen say the tuna canneries mark the end of their way of life