Lack of funds for life

Staff at one of Papua New Guinea’s biggest hospitals have called for a rise in public admission fees after patients were refused life saving surgery. 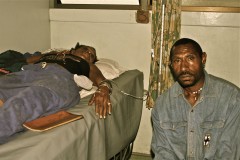 A man waits anxiously while his wife is treated.

Modilon General Hospital in the Madang Province has had difficulty providing healthcare to patients due to a lack of funding, and staff believe small increases in  public admission fees will at least,  help reduce the problem.

The Biochemistry, Mental Health and Operating wards are the worst off and all require immediate financial support.

The main sterilization machine located in the operating theatre has been malfunctioning for over a year, leading to a long waiting list of patients requiring various critical operations.

Some equipment is sterilized in other wards, but the number of patients being operated on is seriously decreased.

The only current pathology testing centre is in Port Moresby, now inundated with test specimens that can take months to process for patients.

According to  Andrew Weiss, a Canadian Volunteer Student Doctor, sending tests to Port Moresby is useless.

“Biopsies are systematic; it takes months to receive the results and by then the patient is dead or inoperable.”

The Madang Province Assistant Director of Health,  Arthur Walgun, said the public hospital did need more funding but he had not heard that fees would be increased anytime soon.

The Postnatal care unit was renovated several months prior and is expected to reduce the number of child birth deaths in the Madang province.