Pandemic Games 2021: Queensland and WA as Fortress Football offer refuge to teams and a semblance of normality 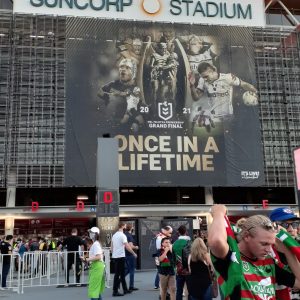 Dodging the world disease in Australia almost proved too much for sports industries trying to keep up elite entertainment for thousands of spectators and save their multi-million dollar balance sheets.

The major codes – AFL, NRL and international Rugby Union – resorted to moving their players in sealed-off ‘bubbles’, holding them in camps away from home and locating them in at least nominally safe stadiums at short notice.

LIFELINE FOR SPORTS AND INDUSTRIES

It came down to the Australian Football League (AFL) playing its Grand Final in Perth on 25 September and the Rugby codes finishing their major contests for the season at stadiums around Queensland.

Sports, especially football became a key industry for Queensland in 2021 as, taking risks and literally paying a price, it came to the rescue of several competitions unable to play in heavily locked-down locales.

It became a familiar ritual to see the Premier, Anastacia Palaszczuk, at the eleventh hour pronouncing no new cases of COVID-19 had been recorded, so the game of the day could go on.

It was hardly secret that for some of the big games her government had provided incentives, once said to be $4.5-million, to ensure they were held on northern turf – a hefty compensation for tourism hit hard by the absence of international or inter-state travellers during the epidemic.

Thus it was that COVID economics saw the opening game of the signature tournament of Rugby League, the Queensland – New South Wales State of Origin, happen in of all places Townsville in North Queensland. It had just been peremptorily shifted from the scheduled venue in Melbourne, which was moving into a fresh health crisis, on 9 June. 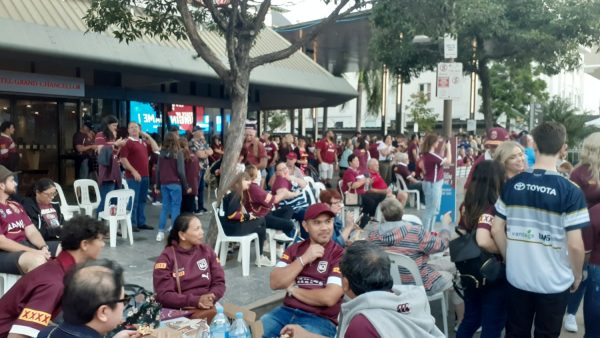 The Townsville populace, a living incubator for the code, seized the moment to crowd into the city’s main street, near their new stadium, before moving to the venue forming a mighty sea of maroon.

Although, it happened with an air of foreboding. Crowd love can’t really win the contest. Themselves experts in this game, the people knew that as in 2020 the New South Wales blues would probably be the better side and likely give them a thrashing – as happened with the scores ending at 50-6. 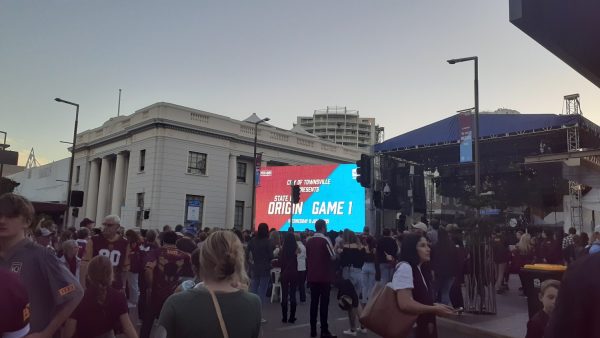 Is there bizarre psychology in sports, particularly in times of crisis, not only for spectators but for the players?   Belief that State of Origin can put a hoodoo on clubs detaching players for that extra competition, or at least exhaust them beyond peak usefulness, seemed to be especially true for some in 2021. The competition front-runners and eventual winners Penrith started losing, their co-captain Nathan Cleary dropped out for a time with injury, they needed a late return to full form. The North Queensland side, the Cowboys, after starting to win some games, collapsed for the season with the sensational Origin defeat at their home stadium.

The second ‘Origin’, played in Brisbane as scheduled, promised to be as bad or worse, and was; Queensland failed to score, going down 26-0 on 27 June.

Sport, a little more than life itself can turn up surprises, and there would be a turn-around, all the more dramatic because of the way it would dash the expectations of keyed-up spectators. Where game 1 had been before North Queenslanders in marrons’ merchandise, this one on 14 July was the reverse. Played at the Robina stadium on the Gold Coast, a stone’s throw from the border with New South Wales, the game happened before a preponderant NSW crowd fully prepared for a party. Could there have been so many from NSW living on the Gold Coast, or given border passes for the “bubble” operating at the time?

They would be disappointed, no gloating to be had, but did see a return to the traditional exciting and bruising close tussles of Origin football. The home side, grabbing at small leads, defended well. The visitors, badly wanting a whitewash 3-0 for the series, kept up pressure; in the dying minutes attempting an artistic long-shot, long-range penalty kick, by Latrell Mitchell. Falling short, otherwise it would have levelled the scores. Not to be, Queensland won 20-18.

Similar thrills were in store for the close-fought NRL Grand Final, fears of COVID thrown aside like face-masks when the beers come around, as a 39,000 strong crowd, held to three-quarters capacity for health protection, occupied Brisbane’s Suncorp stadium on 3 October.

Rugby League managers could be relieved they had “got there” to end the season; but only after a tense 48 hours as Queensland Health tracked down and scrutinised a fresh handful of infections – in the event not warranting a mooted postponement.

The Grand Final itself between two teams from Sydney had the look of a two-man contest: the veteran coach of South Sydney Rabbitohs, Queenslander Wayne Bennett, who had evidently used some fabled magic powers to bring the team from behind; versus the star player from Penrith Panthers, Nathan Cleary, coached by Ivan Cleary his father, looking for his own first premiership in a long career. If commentators called it Penrith’s game, the advantage never appeared on the score-board, Penrith eventually the winner 14-12.

Was the State of Queensland flirting with crisis and death by permitting these roaring events? Many in the stands, even though at one-off, not daily gatherings, all facing one way, with numbers and distance controls, masks and other protections, vaccination “pop-ups” in the car park, did come up with some “good tricks” to by-pass the rules. The main such trick used the loophole that you could skip the mask by eating and drinking; just organise a constant rotation to the bar for your group, so you can keep sipping and be on the right side of the law the whole time, see?

Still, there have been few if any reported COVID cases in Queensland linked to this binge of footy. The state even has received a kind of “reward” with confirmation that a second Brisbane club will enter the NRL in 2023, one of three contenders from suburbs around the city outskirts, making 17 in the competition: four from Queensland, nine from Sydney, others from Canberra, Melbourne, Newcastle and Auckland.

INTERNATIONAL RUGBY SERIES – IN A “BUBBLE”

Amid some grumbling and anxiety among the non-football public in particular, as the improvised Rugby League fixtures were being hastily set up, came news that another major event would also be accommodated – the Rugby Championships for teams across the southern hemisphere.

South Africa’s Rugby Union side, the Springboks, kept out of competition in 2020 because of COVID restrictions, would be there, along with the Argentinian Pumas, New Zealand and Australia; all contained in a bubble arrangement, playing at both regional stadiums and at Brisbane. It added to Queenslanders’ experience, on weekend trips, of being bumped from their resort accommodation or confronted with floor-to-ceiling screens partitioning off reserved areas, “bubble” people on the other side.

The “bubble” was called for as conditions got worse around the country, just making it possible to put on the last eight games of the series, four double-headers with all four teams playing weekly, (12 September to 2 October). New Zealand won all their games bar one (against the Springboks), confounding the idea of a new rule in Rugby Union, that the All Blacks will win. The Wallabies, second in the series, had a return to glory days winning four games in a row.

Said a grateful CEO from the organisers, Brendan Morris: “I would like to thank the Queensland government for working with us around the clock to … allow us to complete the tournament.”

GLORY IN THE WEST

Not to be out-done, COVID-resisting Western Australia, a home of Australian Rules football, offered up Perth stadium for the AFL Grand Final of 2021 – as much of a shock event for followers as the Rugby League taking Origin to Townsville.

Bands of supporters kitted up in strange colours, raiding the merchandise counters. Both contenders were from Melbourne, the Western Bulldogs and Melbourne, called the Demons, the Demons being both favourites and sentimental favourites – trying for their first premiership flag since 1964.

Bad was the impact of the accursed disease in Victoria. The AFL with its heart in Melbourne had reluctantly passed on its traditional finale at the MCG (Melbourne Cricket Ground), in 2020, for the first time ever – holding it at the Gabba in Brisbane. If the crowd there was friendly, the turn-out in Perth, true AFL country, this year was thunderous. (Back in Melbourne Grand Final parties defying lock-down rules produced a sad footnote with a rash of COVID cases).

Does sport unite the nation? Does it divide it? For followers, do these elite competitions generate some feeling that things can be ‘normal’ again? At least, they seem to have gotten away with it on the pandemic front — keep crossing fingers and touching wood. Those who took part got a break – they loved it a lot.