Queensland elections: Youth crime and race get politicised in Townsville

There seem to be some screws loose in Townsville, with combined efforts on different fronts to make an election issue out of juvenile crime involving young Aborigines. 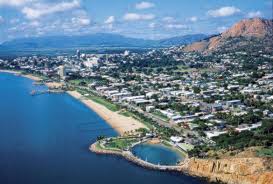 Media coverage around the town includes:

Such carrying-on gets some extra importance because of the Queensland elections on 31 October, where a “law and order” campaign might help swing three marginal seats held by the Labor government in Townsville

The Police Minister, Mark Ryan, says the government will “try anything” in tackling youth crime — quoted on 3 October, page seven in the Townsville Bulletin, a rare survivor of the Newscorp regional print shut-down.

The Liberal National Party has been working to heat up the issue for years, predictably demanding harsh penalties and boot camps; tough and simple policies, maybe not solutions to a problem, but maybe worth votes.

The issue was got onto the agenda in 2014 by the Deputy Opposition Leader, Tim Mander, telling parliament that Townsville had become the “unofficial crime capital of Queensland.” 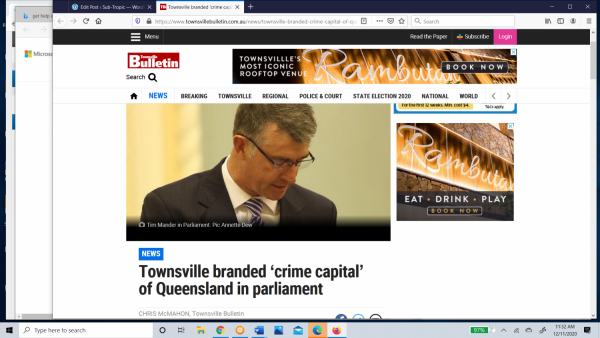 He had some help from the Bulletin, which, in a piece by reporter Chris McMahon, said it had obtained a set of crime figures for Mander’s speech — and with a little more help from the newspaper the “crime capital” slogan got currency.

TRYING NOT TO SAY IT WAS ABOUT RACE

The data being used are mostly police statistics on property crime by persons 10 to 17, showing Townsville’s numbers well above state averages in the category – by 72%.

The race aspect of this has been muted. While the whole town knew it was about black children running wild at night, media routinely avoided the “black” word — street-corner conversations about the “crime wave” adopting the same dog-whistle style.

That changed in late June when four young teenagers were killed, as a stolen car crashed  on one of the main city thoroughfares.

Media coverage became chastened. It was handled as a tragedy and anxious community concern. Indigenous elders and family members explained their situation and problems they had dealing with some of the young. Barring some comments from the right-wing fringe, the community response on the whole was respectful.

It has come down to a tug-o-war: on one hand temptation in some quarters to keep on with the law and order angle, and racist undertones; on the other a more humane search for solutions.

The chief response by community leaders to what is a serious problem with children and crime has been mature, not so much moral panic or vigilantism, more working together on preventive measures or On Country training.

Police say such crime in Townsville has reduced by 7% over a year, but repeat offending continues as the chief problem. They say 10 per cent [presumably of young offenders] commit half the city’s youth crime —  about 30 individuals.

“There are some kids that are so far entrenched in criminal activities, it would be extremely difficult to extract them out of their behaviour and send them on a different course.”

As for an enraged or frightened public, this is no Mississippi in the 1930s. It is easy to find citizens very worried about the break-ins and car theft, but also showing some understanding of the problem. They don’t want to lynch the young offenders.

News media wanting to cast Townsville people as on-guard vigilantes need to do better than produce just one angry hoon in a black get-up. And here is Robbie the cruising vigilante, saying he’s been 19 years on the road.  Have Townsville police pulled him up? Will they before the election?

He is accessible enough, for an ABC journalist Sofie Wainwright to get him on camera, giving him the protection of night sunnies, mask and a distorted voice track.

Some anatomising of this recent coverage from ABC:

The vigilantism story began with the intro: “In North Queensland some residents have taken to the streets in an effort to curb youth crime …” There was a camera inside Robbie’s car in a spooky night-crawl setting. The reporter, Wainwright, says: “crime has Townsville on edge “, social media is enabling would-be vigilantes to connect. Robbie says he will “get them on their way before they break in …We intercept, we block them in, we drag them out of the car, we give them a good flogging”.  The report is spiced up with archive video of black children attacking a bus driver, and a young would-be assailant having a go at a café counter attendant. It has the “72 percent higher” juvenile property crime figure, and the senior police officer, Chief Superintendent Craig Hanlon, threatening even “well intentioned” vigilantes with arrest. The June car accident is cursorily mentioned with footage of the wreck. An aboriginal elder expresses concern about safety from “vigilantes”, for young people going out who are not involved in any crime. “Some Townsville residents are sympathetic [to vigilantes]”, so the story goes. A few community members, one a crime victim, make on the whole reasonable observations – no hysteria there.

This is headlined: “Vigilantes chasing stolen cars, patrolling streets, as youth crime rises in Townsville”, (tamed down from another version, “Townsville vigilantes hit the streets among spike in crime”, and another, “’This town’s gonna explode’: Vigilante’s warning against youth crime scourge”). Sofie Wainwright.

There is more on Robbie: “He spots two boys riding bikes and snaps his torch on them. ‘Get the f*** home,’ he shouts …’We’ve got the theory that if you look suss, you are suss’, he said.”

Evidently editors had some qualms about the story and added a note to this online article, a little cryptic, saying changes were made to an original version.

Television stories are taken down after a week but the online version remains: “Townsville police concerned about possible vigilante behaviour after four-car crash near police station”. Chloe Chomicki and Sofie Wainwright.

“Police say they are investigating whether a member of the public had been following several stolen cars that crashed in Townsville early on Monday morning”, is the lead.

Working out this tale of mayhem sourced to police: somebody was maybe tailing “three cars that had been stolen during various burglaries”; all four cars were in a collision; occupants of the stolen cars jumped on and bashed the other car, while occupants telephoned police. It was 2:30 am in suburban Kirwan, where trouble often takes place. If the said tailing car was a “vigilante” one, and had more than one person in it, this is a first indication in the coverage that Townsville actually has more than the one vigilante. It is not indicated if Robbie was in the car, and whether this story from the police led journalists to Robbie, for him to potentially incriminate himself — especially if actually committing his claimed abuses, no matter how bad or marginalised his targets might be.

The posting also screens phone footage from an assault in another Townsville suburb.

This posting on line has the ABC stepping away from beat-ups, and moving in the direction of the social responsibility school of reporting, headlined: “Townsville community leaders, criminologists and police suggest ways to tackle youth crime”. Sofie Wainwright and Siobhan Heanue. (Elsewhere on the site it is still sweeter: “A bad reputation for crime, but this city is not about to give up on its youth”).

Possibly with co-author Heanue as a steadying influence the report delivers on  the promise of a problem solving approach, including the comments of Deputy Commissioner Taylor on the dilemma with re-offending.

ABC NOT MEASURING UP WELL

In this run of reports the ABC has advertised that vigilantes are out in Townsville, without demonstrating it; it has two possible “vigilante” candidates in the Kirwan car crash, and one anonymous thug. This deserves critical attention because of the two incendiary factors in the mix:  racial prejudice, and the very tense election season — with one political party banging the tin on juvenile black crime.

It is a given that the partisan media – the 2GB-4BC network, Sky News and Newscorp – will produce partisan material. The ABC has statutory obligations, and a code, to ensure the public have access to at least one main news service that gives quality and is straight-up in its approach – not the case this time around.

Lee Duffield, reporting here from Townsville, is a former ABC correspondent and editor, and former teacher of Journalism at James Cook University and QUT.

This article was first published in Independent Australia on 14.10.20.