Coronavirus – drugs and the ‘billionaire class’

During the crisis of 2020 billionaires are having a field day, increasing the trend where they try to set national policies — drawing extra attention to themselves.

The last few months have seen many curious developments, among them certain billionaires pushing to cause people to use the anti-malaria drug hydroxychloroquine, as a treatment for CORVID-19.

Public health authorities have approved such research in laboratories, and even controlled trials, but have been anxious to warn ordinary citizens against using hydroxychloroquine untested against the coronavirus. Used wrongly it is dangerous and public campaigns extolling it will not help. Their anxiety has been heightened by the interception of uncontrolled quantities of it entering Australia. Researchers in France who reported some progress with the drug also joined in the warnings.  “Il faut absolument eviter automedication avec la chloroquine”, they said — absolutely avoid any self-medication with hydroxychloroquine.

Other ventures of this kind come from billionaires who make more orthodox choices, while still making moves for them to decide what will be done by all of us, and in the process giving away much money, even most of what they have:

What could be the reasons for members of the billionaires’ club to go for an outlier like hydroxychloroquine?

WHAT IS THE ‘BILLIONAIRE CLASS’ ANYWAY?

A ‘billionaire class’ is getting talked about in popular sociology. In societies that are as financialised as today’s, money will be the strongest denominator of status, or even the only one. That will be true especially if the deregulated economic system gets so anarchic a very few get most of the money, becoming able to buy anything they want, even to get the esteem of others – hence high socio-economic status (SES).

The “billionaire” title took over from the eternal “millionaire”, which used to mean a rich person set for life and living high on the hob in a way fairly rare up to about 1970, e.g. big swimming pools and garages full of fast cars. With economic growth and inflation of the currency, there are millions of ordinary millionaires in the Western world today. Billionaires are different, much richer in real terms, in appreciable numbers, a product especially of the last fifty years of neo-liberal economics. It is a system that stands for getting wealth out of public hands and government legal controls, and into private hands, turning life into a business-driven free for all. It means the emergence of private fortunes as big as the wealth of many counties or Australian states. The actual characters and personalities are diverse; they would acknowledge one another’s status, having so much – money – in common.

The characters are diverse, most content to be quiet and even pay their taxes, enough that they don’t get noticed, and don’t get trouble from kidnappers or the Treasury. Some are reticent personalities; others are socially responsible and also wanting social recognition; there are actual geniuses unable to stop thinking, and turning it into money; there are loud-mouths, power seekers, eccentrics.

HOW TO RATE THEM

So before getting into the confusion of thinking these are all the same, uniformly top status individuals you’re supposed to look up to, consider using some standard metrics as worked out by sociologists before the money grab began, e.g. break-through studies on American social classes by W Lloyd Warner. Such work typically set up investigations to determine status, based on four independent variables: Housing (the value of your house and land), Income, Education and Occupational Status (often obtained from sources such as periodic measures of public ‘trust’ in certain occupations). Making all four variables equal in weight, construct a rubric where each variable is described, rated and given a number — say a percentage. For example under how-much-education, billionaire Forrest’s PhD should get him 90/100, Palmer’s biography lists a Law diploma, evidently two years FTE, rateable at 63/100.

In the disrupted world of rampaging communication and wild capitalism, this article suggests adding a fifth, subjective, more ‘qualitative’, moderating variable, because for billionaires at least, gross holdings of money can swamp the calculus and obscure the picture across the board. That variable might be one for ‘Esteem’. Conventionally a player acquires a certain status if other holders of that status agree to let them in. By extension, with esteem, check how any reasonable observers might judge the status seeker, giving a thumbs-up, or thumbs-down from the public on how much status they should have. In the two cases mentioned, consider the accolades conferred on Forrest for public service and systematic sharing of his wealth, and set that  against any public opprobrium; Palmer also has formal tributes or titles in his record, but has got into fractious party politics, and as such finds both admirers and others who hold him in contempt. Which would get the higher marks for esteem?

A small SES exercise was embarked on, on the two billionaires mentioned, which may show that even in 2020 status is not only about money. It questions whether access to vast money, much of it your own private fortune, is itself sufficient to get you the highest status. For convenience of reading, the results might be compared with the standard examination ratings used by most universities. In that case Forrest would get a High Distinction (HD), with overall 91% over the five variables; Palmer a Distinction (D) on 77%. Getting wealth and status into perspective, such ratings remain attainable by many, with scores that firm up where criteria other than money are taken into account. An example here shows the workings for an assessment for Donald Trump. 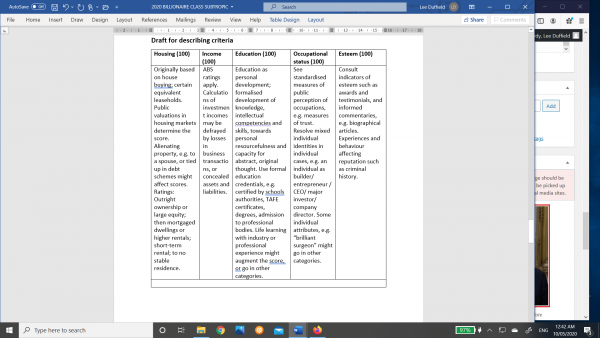 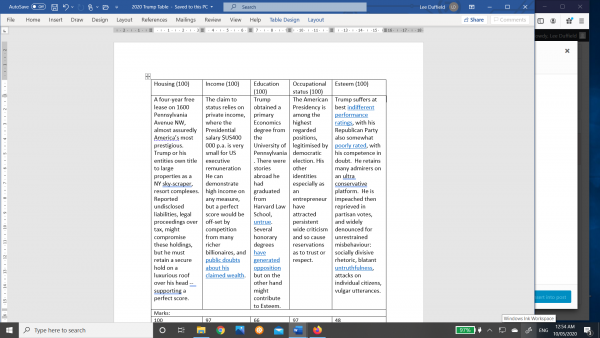 Notes on the assessment for Trump

Total and comments: 80% – ‘Distinction’. Getting wealth and status into perspective: money remains the key source of socio-economic status, though as in this assessment the score may change where criteria other than wealth are taken into account. The variables for education (which will demand some humility while producing mostly widely-valued personal attributes), and esteem (with extremes of reaction to the man among other people, in big numbers), have denied Trump a place in the top drawer of society.