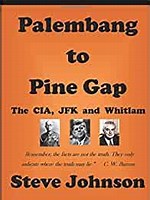 What if a young Aussie from a Dutch East Indies family that fled the Japanese, ended up flying for Air America, fell in love, snuffed a Japanese war criminal, and the happy couple went to Dallas where they saved Jack Kennedy?

Steve Johnson, an Australian family man who spent time in the navy and ran his own business as a computer doctor, has written a one-off novel set in the times that shaped his own life and outlook on the world.

It is especially a story for all those who are open to hearing what might have been if John Kennedy had survived, and hearing about the tentacles of transgressive corporations running the United States and the world – also those with backgrounding in Australian folklore about the Japanese invasion of the Asia Pacific.

To call this a romantic novel would be drawing a long bow, as it is laden with whole sections of historical background where the author draws on wide reading, but specifically 15 books he lists in a bibliography.

It is a “mixed genre” work, the product of enormous industry pulling together the episodes of history, with the main characters and their adventurous lives providing personal story-adhesive between the parts.

The source books range through exhaustive accounts of the Japanese in Singapore and Indonesia; Stephen Kinzer’s Brothers, about the duplicitous Allen and John Foster Dulles;  histories of Air America and other undercover ventures of the CIA, linking to different probes into the Whitlam dismissal; and Mark Aarons and John Loftus on the Vatican, the Nazis and the Swiss banks.

These texts are handled in the way of a good research article, appropriated and taken as a lesson, not so much a potting and transferring into the narrative in summary form.

The prose is clean and clear, so the story and treatment of the reference material provides an interesting ‘read’, running to over 80 000 words.

What happens in the novel part of it, is that Mila van der Laan escapes to Australia with the children as her husband is personally beheaded by the chief villain, Colonel Masanobu Tsuji of the Japanese Kempeitai military police. Tsuji is well-connected in reactionary circles, escaping justice, going on to a nefarious role in the post-war era. Mila marries a Sydney businessman, becomes a Labor MP in the Whitlam government, and conscientiously raises her son, Pieter, who becomes the avenger.

Conventions of the novel exist among the historical themes; the family epic has agonising choices for its characters, some sex scenes, revelations about the past.

This re-visiting of the hegemony of the American Republican Party in the early Cold War years, as in the present-day with the Republican Presidency, Senate and Supreme Court, shows how looking for conspiracy theories can disappoint.

So many of the goings-on are overt and to be seen, there is not much conspiracy about it at all. The question is: can we discern, and show where the prioritising of corporate and conservative interests displaces actual protection of the best interests of the country and preserving democracy?

Tales of how ‘Nazi’ gold, and treasure purloined by the Japanese, came to be stashed away then employed for undercover campaigns against communists; cruelties of the Japanese as occupiers; who communicated with whom in the campaign to ‘get’ Prime Minister Gough Whitlam; what this had to do with the Pine Gap military communications base; how ‘they’ walled off evidence that should have gone to the Warren Commission into the death of Kennedy; these are well-trodden ground, but always bear re-telling.

As said, such tales now have a familiar feel in the world of geo-politics, based around Washington DC; they might be read as a warning.