This is on behalf of all those who will be getting a bit worried about how our women’s soccer football team is going to handle things now.

We have the Australian men’s Cricket team prone to go wobbly on the field and now the Football Federation looks like putting pressure on the Matildas to go the same way.

Citing surveys into the Matildas “workplace” by the players association the PFA, and the Our Watch organisation set up to counter mistreatment of women including domestic violence, the FFA on 19.1.19 suddenly sacked the team coach Alen Stajcic.

That was not well managed, not transparent: the survey reports have not yet been made public; the coach had done well with the team in competition; as runners-up in the 2018 Asian Cup they were fast becoming the apple of Australians’ sporting eye as great improvers — working up to the World Cup in just five months’ time.

Some of the players in their social media gave an inkling of the psychological impacts that can take hold and baulk the competitors in hard, unforgiving elite contests:

Samantha Kerr 2018 Young Australian of the Year: “I am still shocked and upset. My trust was in Staj to lead us to the World Cup final and I believe he was the best coach for that.”

Lydia Williams the goalie: “I’m still in shock. The achievements we succeeded in with him guiding us were monumental.”

Elise Kellond-Knight mid-fielder: “Today our world turned upside down. Although we aren’t privy to the finer details of Staj’s dismissal, I respect him as a coach.”

The Co-captain Lisa De Vanna told Reuters the sacking would affect performances on the field: “I’m just sad. Not just for Staj but for other people that have gone through this. This is the job of his dreams. It’s been taken away from him. I’ve felt that too. It’s still raw for a lot of us right now.”

Others are said to have dumped on “Staj” in the surveys, about them being put under “mental stress”, although as said, the survey reports have so far been withheld.

Note to FFA: Let’s have the facts. Comments from all sides affirm he is not a sexual offender. What is he supposed to have done?

The ABC columnist Richard Hinds gave a best-available appraisal given the amount of secrecy:

“As we have seen in Australia across the past year particularly, Australian women’s sport is improving rapidly. This is partly the result of improved pay, tougher training regimens, demands for greater commitment and other raised standards.

“At the same time, rightly, the field is now considered a workplace with players’ mental wellbeing, health and safety and other rights to be respected even as coaches scream at their players to run another lap or lift another weight.

“What we don’t know is whether Stajcic crossed the line, made unacceptable demands of now semi-professional footballers and, as some have alleged, even facilitated an abusive culture; or whether those players who expressed their concern to the PFA and the FFA were simply incapable of meeting the tougher demands expected in an elite sporting environment…

“But throw into the mix inevitable personality clashes and the age-old problem of discontented players blaming the coach for their non-selection or allegedly unfair treatment, and this is murky water.”

WHAT’S IT ALL ABOUT?

Does it have to come down to this: be tough and Australia wins in a tough world at the top, or be nice, avoid putting players under pressure, and we lose?

The answer seems to be to balance out both, highest standards and the most mature treatment – tricky even for the best of professionals.

Likewise we have to tussle out which kinds of pressure: the out-there sports pressure of a meanie coach getting you motivated, making you train-and-train and go for it; or the more Byzantine kind, a different kind of “sport”, where off-field conflicts, half-explained sackings and knifings just might make the team forget to compete, go sick at heart.

The support system affects the competitors who are the ones to ultimately face the question: if it is about competition, how much do they want to win?

Something happened to the swimming team at the 2012 London Olympics, maybe to do with motivation, application, distraction, need for over-drive. Those who would recall watching successive teams striving at time trials over the years were left wondering. It looked like a lot of Facebook messages getting sent home instead of medals.

In fact the social media factor came up in official reports on the swimming debacle, supporting the idea that the athletes like all others in 2012 were using it in its early days, especially with mobiles, before they could start setting up adequate personal management skills and psychological defences:

“(On social media) some athletes engaged deeply in public debate on what they were doing, how they were doing, and even on who they actually were as individuals. This served to fuel emotions, good and bad, at a time where calmness, intensive focus and consistency should have prevailed [Sub-tropic’s emphasis]. Social media also allowed already disconnected athletes to seek support from sources external to the team, which again diminished the reliance on a unified team.” 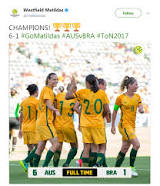 Back to the Matildas who now need to keep their focus more than ever.

They can get some inspiration from going over the records of Australians over the decades making a great mark in international sport across the board: plenty of cutting edge and science, work, more skills development, team spirit, green-and-gold, concentration – don’t forget character.