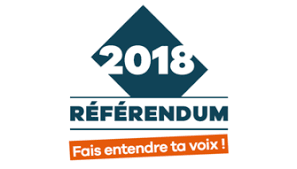 The no vote on Sunday’s independence referendum in New Caledonia came close enough for Kanak independence leaders to say they can fight again.

Lee Duffield says that result might also be sweet enough both to damp down anger in the Kanak community, and cut down bravado and cockiness on the other side.

NO DOESN’T MEAN NO

Headlined the Noumea newspaper, Nouvelles Caledoniennes: A large vote for no, but a surprise with the yes.

It said the independence forces had achieved “remarkable” strength for the yes vote in the northern Kanak districts, and also had mobilised support very effectively in the anti-independence south.

No doesn’t mean no in New Caledonia politics because the so-called Matignon Accords that set the rules allow the Melanesian Kanak parties to come back and try again, in 2020 and 2022.

The simple arithmetic of a referendum gave the independentist side 43.6%, taking them comfortably past the psychological barrier of 39% which marks the Kanak proportion of the total population.

There is support for independence beyond the confines of the tribus, or Kanak villages that voted overwhelmingly for yes.

They have friends, and so future contests stand to be about politics and principles, not just race.

ANTI-INDEPENDENTISTS – WINNING AND NOT WINNING

The no vote was generated by affiliates of conservative French political parties who ran a scare campaign, saying Paris would cut off generous budget supports if the territory went for independence.

They had expected a hands-down win, up to 70%, and foreshadowed starting a move in the French parliament to cancel the plan for the two referendums meant to follow.

With 56.4% they have had a win but also got a kick in the backside.

Talk about splitting the Kanak votes, and Kanak women voting for no, came to nothing.

Thirty years ago these interests – settler groups, several with investments in the lucrative nickel business – had it mostly their own way.

With a right wing, colonial minded government in Paris, still testing nuclear weapons in the Pacific, the electoral system in New Caledonia had been heavily bent to their advantage.

Virtually any French resident or visitor could vote; the Kanaks declared a boycott, and an independence referendum came in at 90% against – soon dropped from the books.

Amid armed rebellion by Kanaks, a touch-and-go drive to get the parties together succeeded, and produced the long-term settlement leading to the referendums this Century.

What will happen now?

President Emmanuel Macron in Paris declared the result was good for democracy, as President he appreciated the support for the French Republic, and also he declared for more negotiation.

Il n’y a pas d’autre chemin que celui du dialogue, he said. The only way to go now is through dialogue.

To emphasise the message his Prime Minister, Edouard Philippe, spent Monday in New Caledonia making the rounds of discussions with all the main parties, including Kanak traditional leaders – the comité des Sages.

The negotiations that started at the Matignon palace, headquarters of the French Prime Minister in 1988 focused on ending the alienation of the native Kanak people in their own land– especially though creating a voting system they could accept.

It set up Sunday’s vote, using a roll that was open only to people with a family record of settlement in the territory going back more than 20 years.

CALM CONDUCT OF THE VOTE

The calm conduct of that vote was a sign of the success of the campaign for inclusion and the closer-than-expected result may let the calm continue.

There’s been some trouble, especially fires set off and disturbances at the town of St Louis, cutting the highway North from Noumea – 130 gendarmes in attendance with armoured cars.

Generally no widespread arson or rioting at time of publication.

The pro-independence parties now have the option of starting a new campaign to extend support for independence further than the indigenous community.

That would mean getting into Western style campaigning across the whole of society, to be persuasive, while so far – with great success- they have just concentrated on getting out the community vote in the villages.

They have put up proposals already on how an independent republic would be financed to deliver jobs, more support for education and extended health services – key to their reform agenda.

So far however those have been ridiculed by the other side, including teams of know-alls from commerce wanting to see the “business plan”.

NEW DEMOGRAPHICS AND A CAMPAIGN FOR CHANGE

The independence movement has two years to put up a detailed case on economics and governance, including fresh assurances that the rights of all residents will always be respected.

If that does not bring across more voters, and the 2020 referendum goes “no” once more, the Matignon rules permit the third, and final referendum two years after that.

The changing demographics of the territory might assist, as a growing percentage of New Caledonians – now over 20% – do not identify with either racial or ethnic bloc, Kanak or European.

Those might provide one constituency for the idea of an independent state, a Kanaky, (Kanak dominated instead of French dominated), but more multi-cultural than ever imagined in the past.

In a footnote to the voting on the weekend, tributes were being paid to some who acted as peacemakers: Jean-Marie Tjibaou, the revered leader who founded a Kanak cultural movement that gave substance to the will for independence; Jacques Lafleur, Noumea-born, long-time leader of the conservative settler parties, who saw the wisdom of making a settlement and joined in negotiations; Michel Rocard, Prime Minister of France, who convened the initial talks at the Matignon, and got all parties to formally recognise that the others had a right to live in New Caledonia; Lionel Jospin, another French Socialist Prime Minister who updated the agreement with the influential Noumea Accord in 1998.