New Caledonia trending ‘no’ to independence? 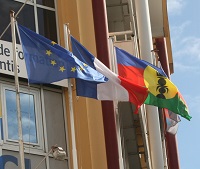 Opinion polls are saying electors in the independence referendum set for New Caledonia this year will strongly support staying with France.

Lee Duffield as a correspondent covered the original Paris negotiations on independence 30 years ago.

He says a meticulous deal coordinated by successive French governments has shortened the odds their way, but the sticking point is how the native Kanak people will wear any outcome.

Two polls taken in May and coinciding with a visit by the French President, Emmanuel Macron, were emphatic on two points: First, Opposition to independence for New Caledonia was running high (60% in one poll, 58% the other), and support for it was low (12%, 23%), with several undecided. Second, there were strong concentrations of pro-independence support in the regions heavily occupied by the Melanesian community – the Kanaks.

Much of that outcome comes from the long and detailed negotiations that were started after the dark days of the mid-1980s, and the massacre of Kanak nationalists on Ouvea island by French counter-insurgency troops — on 22 April 1988. One brief history of the conflict, by David Stanley in his New Caledonia Travel Guide, sets out the main facts, including the deaths of six police and the 19 Kanaks on Ouvea.

The drive by authorities to shut down protest had further aggravated Kanak dissent and brought on a movement for revolt.

Much hard talk about holding onto the “colony” was injected into the campaign for the French presidential election running at the same – but that move did not succeed.

While New Caledonia had missed out in the post-war era of decolonisation, there was no longer an appetite for punitive wars against natives, and the conservative Prime Minister, Jacques Chirac, lost his bid, that time, to be President.

It was left to his successor as head of the French government, Michel Rocard from the Socialist Party to try to settle a dangerously conflict-ridden situation.

A part-resolution was achieved with the 1988 Matignon Accord, so called as it was produced at the Prime Minister’s headquarters in Paris, the Matignon Palace, at a round table of parties — including Kanak leadership, together with the French settlers, called Caldoches.

It commenced a large-scale economic development program that would benefit all sectors, provided amnesties for those who had been involved in the fighting, and for the future – moves toward a new, and fair referendum on independence.

A successor agreement, the Noumea Accord, ten years later, set-up self-government and a power-sharing arrangement. An elected New Caledonia government is responsible for all functions except for military and foreign policy, immigration, police and currency.

Conservative parties with a European-French constituency have got a small parliamentary majority but under the agreements must share ministries with the pro-independence side.

This year’s referendum is to decide whether New Caledonia will continue under such an arrangement or become an independent state.

WHO GETS TO VOTE?

The drawn-out talks among the parties, over the decades, have put a main focus on who gets to vote.

Kanak representatives have insisted on keeping French-born electors off the roll, at least if they have no long-standing or abiding interest in New Caledonia.

They have also demanded, and received concessions with some effect along the lines that the vote on 4 November will not cut them off from independence forever and altogether.

The vote on 4 November, if it is a “no” to independence, might not be the end of it.

Under the Accords, one-third of the members of the New Caledonia parliament, the Council, will be able to obtain a second referendum — with Kanaks expected to have enough seats to reach that number.

If it should be “no” again, they can then obtain a third referendum.

Beyond that, if it is “no” yet again, one more intervention by a French government might be called for, maybe to set up an ongoing, but still French form of self-government.

The rules on eligibility to vote are strict and very clear.

These make it plain how every vote counts, and show how half the battle has been fought in making the arrangements before voting is to start.

They stress that voters need to show that their core “material and moral”, or strictly personal interests are in New Caledonia, with tests such as where parents were born, and ten years’ continuous residence during recent decades.

It will not deliver enough advantage to give it to the Kanak community, but is very far from the time of domination when many Kanaks were not enrolled but almost any French just-off-the-boat could get a vote.

TRIUMPH OF THE PEACE MAKERS?

Is this a triumph of peace-making?

The bringing together of parties, the power sharing, the buying of time, and the spending of money to improve the lives of Kanak communities, not least on education, have got the territory to the point of hoping for a peaceful and fair vote this year – 30 years on from the era of open conflict.

Yet the ideas of freedom and national self-determination, the rights of first people, confidence-building, respect for culture, all count heavily, and these are powering support for “yes”.

New Caledonia already has its share of ongoing conflicts around identity, race, a share of wealth, and who should run the country – things are not really peaceful in the real world.

Trouble breaks out over environmental breaches committed by any of the three large nickel mining concerns on the big island – Grande Terre.

Kanak workers are represented by unions, so a community protest over pollution may become an industrial dispute.

As crunch-time approaches, if thwarting of all-out independence looks likely, will resentments and anger buried under the blanket of soft persuasion resurface, reviving ideas of insurrection?

Add in fears about nationalistic and racist movements back “home” in France, and what might happen under some future, hostile French government wanting to turn back the clock.

Consider these now-standard propositions on why the no vote is looking strong in polls:

Keeping prosperous. The French state has delivered on its development pledge, and benefits from mining and the public spending have raised Per Capita Gross Domestic Product very close to that of Australia – far above other Pacific island states. The wealth is not evenly shared between Europeans and Kanaks as communities but there is change and opportunity.

Keeping independent of corporate power. Outside interests working one of the world’s main nickel deposits have exploited encouragement rules on tax, to drastically minimise what they pay. Political representatives across the board fear that a small newly independent state would have less chance than France of keeping giant mining corporations under control.

Keeping independent in the Pacific, especially against future domination by China. The French commitment to regional security is a strong card for the status quo.  Emmanuel Macron declared for continued French military presence in the “Indo-Pacific axis”, or geopolitical sphere South of, and excluding China.

Keeping the peace. Where decolonisation brought freedom, identity and respect to many countries there is anxiety, however misconceived, about the “African model” – too many cases of corruption, disorder and death, insurrection, economic ruin, disintegration of society.

The claim from right wing parties, “we don’t want to be another Papua New Guinea or a Vanuatu”, is a harsh rebuke for friendly neighbours, but refers to fears of a breaking-down of government services, street violence as in PNG towns, or poverty and flagging economic development.

The Presidential visit in May was accompanied by actual improvements in relations.

A fresh round table, the G-10, Group of Ten, bringing together the parties, had long meetings with French ministers last November, allowing them to set the date for this year’s referendum.

Macron has expressed the wish for New Caledonia to stay, but light-handedly, promising that France would “invest and protect, and fully engage in Pacific strategies”.

Leaders from the Kanak political alliance, the FLNKS, declared him a change from all the previous French Presidents, saying they accepted the spirit of his approach for future friendship.

“He has truly come up with a geopolitical strategy that we agree with here completely, whether pro-independence or not”, said Roch Wamytan, head of the principal Kanak political group, and a participant in negotiations from the start in 1988.

The cluster of islands 1200 kilometres east of Rockhampton along the Tropic of Capricorn, with its population of 278000 is on the way to making a key determination not simply on its own future.