Many people had a day of immersion into different cultures at the Queensland Multicultural Festival at the Roma Street Parklands in Brisbane’s CBD on Sunday, October 17. 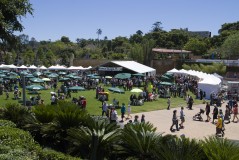 She said people would experience many of the state’s 200 cultures at the festival.

Among the acts on the “Unplugged Stage” was the Russian folkloric ensemble Samotsevty, who performed at similar events such as the Mariner’s Cove Fraser Coast Cultural Festival in south-east Queensland and the National Folk Festival in Canberra in the ACT.

“The members come from the five republics of the former USSR – Russia, Ukraine, Kazakhstan, Kyrgyzstan, Uzbekistan,” he said. 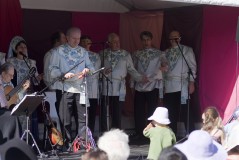 Mr Kosse’s wife, Alla Ekzarkho, is the founder and artistic director of the ensemble.

Mr Kosse says his wife is the only “professional” in the group and with her background as a piano teacher, she organises musical arrangements and leads rehearsals.

“One of the main objectives of the group is to collect Russian folklore, preserve it and perform it,” Mr Kosse said.

“Usually some of the songs we find in recorded music, books with songs that are brought in from Russia … it is difficult to find the text of songs with musical notes so she [his wife] has to write in the notes.

“It is also necessary to divide it to different voices like sopranos, altos, tenors and bass.”

Mr Kosse says the ensemble has performed at the festival at least four times.

“It is really important and people [ensemble members] are proud that they represent the Russian culture and Russian folklore,” he said.

Another performer, Obertas Polish dancer Matthew Swiderek, said he was very nervous before taking the stage.

“It is my first time doing it at this time – I’ve only started dancing this year,” he said.

Meanwhile, Tribal of Jubal managed to get the crowd on their feet and dancing to its fusion of Papua New Guinea traditional music and western tunes. 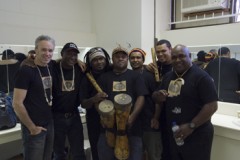 Tribal of Jubal performers in dressing room after the show. Photo: Jin Kok

Ben Hakalitz, founder of Tribal of Jubal said the crowd was excellent.

“I love the Brisbane crowd and it’s a real multicultural setting, so people come here to expect something different every time,” he said.

He says Tribal of Jubal was formed in 2007 and fuses contemporary Melanesia rhythms with Western music by combing traditional and Western instruments.

Mr Hakalitz said the Brisbane Ethnic Multicultural Arts Council (BEMAC) a sponsor of the festival, first approached them to come and perform.

“It’s great, it’s fantastic, it’s the first time we have done the show with this line-up,” he said.

“We usually have one section and a keyboard player but we could not bring them all in so we had to do a different set.

“Hopefully if they like this, we will come with a full band next time – three horns – trumpet, trombone and saxophone and a keyboard.”