Residents of Brookfield, in Brisbane’s west, are in for another bout of roadworks after severe rains have ruined the newly upgraded Rafting Ground Road.

Locals are annoyed by the fact that more roadworks are just around the corner.

Local businessman Kim Rolph-Smith said the upgrade lasted as long as twelve months and could have been handled better.

“The construction for that high volume of water just wasn’t appropriate,” he said. 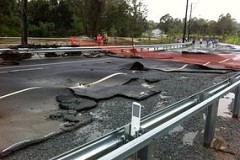 Residents are annoyed the road was destroyed so easily. Source: ABC News

“It took far too long, and now we’ve got another inconvenience for the locals for several months while they repair it again.”

“It’s just a shame, especially this time of the year.”

Mr Rolph-Smith said before upgrading the road, the council resumed land from a local family to alter the route.

“The idea was the bridge was to go across to Willunga Street, and then hook back into Rafting Ground Road, and that never happened,” he said.

“So there’s a block of land they resumed, wasting tax payer’s money once again and never used it.”

Reverend George Barnes from Brookfield Uniting Church said the upgrade was a big inconvenience to those attending services.

“It meant more time that they had to allow, because coming from Pullenvale, Anstead and even the other end of Rafting Ground Road it took them much longer to get to church.”

He said residents were angered about the first round of roadworks and is sure it will happen again.

“They will be, because they’re going to be disrupted in travelling to and from places,” he said.

“I know some of the business in Brookfield were severely devastated by trade during the period of the upgrade.”

Kim Rolph-Smith says residents warned the council before the upgrade went ahead.

“They were all warned by locals,” he said.

“It just wasn’t a sensible construction. It should have actually been a bridge and it was just too low.”

Lord Mayor Campbell Newman has called for a report from the council’s CEO into why the recent $4.3 million upgrade didn’t stand up to the floodwater.