The Royal Australian and New Zealand College of Psychiatrists is calling for a referendum in order to assist toward the improvement of self esteem and mental health within Aboriginal communities. 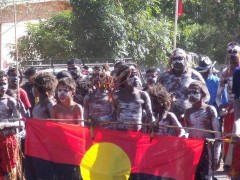 “The apology two years ago was a very important thing and it had great significance to Indigenous people in Australia but unless it’s followed up with some real changes I think that it could end up being seen as a hollow gesture,” Dr Tomasic said.

She said the amendment to the constitution is part of a much needed multi-faceted approach.

“In terms of the constitution I think that recognising all Australians as equals will ensure Indigenous people don’t feel a sense of alienation and marginalisation,” Dr Tomasic said.

“Aboriginal people need very real relief in terms of health, housing, education and employment; we need a treaty to be signed that will acknowledge Aboriginal people as human beings and our very sacred connection to country,” Mr Watson said.

Despite the changes made to the Queensland Constitution which now includes Indigenous people, Mr Watson sees no improvements.

Psychologists like author Dr Pat Dudgeon agree with the college in challenging the constitution.

Dr Dudgeon believes the move would restore self-worth within the community.

“Having Aboriginal people included politically would acknowledge them as human beings, that they are part of this society and I think it would increase the collective of self esteem and the psychological participation within society,” Dr Dudgeon said.