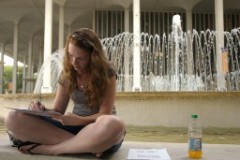 Fees will be spent on student amenities Photo by m00by www.flickr.com

The government wants to pass legislation making tertiary students pay up to $250 towards university amenities.

Students are able to apply to defer the fee through HECS, if they are unable to pay it up-front.

Labor says the extra funding will help more services such as health, education, recreation and to upgrade campus facilities.

Queensland’s Shadow Minister for Education Dr Bruce Flegg dismisses Labor’s gesture saying it is a ploy to force students to join a union.

“I understand the argument that by making compulsory student unions they are able to raise more money more cheaply,” he said.

“However, I think the issue of forcing people to join an organisation for those who don’t wish to as part of their enrolment is really an unacceptable principle.”

VSU was first introduced by the Howard Government in 2005 and
National Union of Students Victorian President Jesse Marshall says students have since missed out on essential services.

“NUS have witnessed student services across the country at campuses decline significantly since VSU was introduced,” he said.

Mr Marshall says the fee will not support unionism behaviour; instead it will be spent on services such as education.

“All the money universities are spending in the post-VSU environment…is all coming out of teaching funds,” he said.

“What this student services amenities fee will allow to happen is that universities will be able to spend the money that they need to on teaching and learning.”

He says NUS has been lobbying to elect an independent student body who would oversee how the funds would be spent.

But Dr Flegg says university services have not decreased as first predicted.

“Currently health and counselling services are quite accessible to people,” he said.

“The people who predicted the sky would fall in when fees became non-compulsory, their fears haven’t really been realised.

“It’s important that we make sure they remain accessible and people are not excluded because they can’t afford it.”

The University of the Sunshine Coast is one of the youngest campuses in Queensland and despite the growth in enrolments, student amenities have suffered since the funding lapse.

“Under the proposed legislation the money wouldn’t be handed over to the student guild or guilds or unions as was the case previously,” he said. 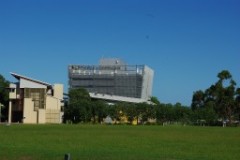 University of the Sunshine Coast. Photo by Kevin Soulacroup www.flickr.com

“There are things that just aren’t going to be provided because they can’t afford them, unless there is some independent funding stream,” he said.

He says since VSU was introduced,  the  USC Guild has been unable to provide any extra services.

“It had absolutely no income sources other than that money coming in,” he said.

“I think it’s a bit sad because today’s students… most of them don’t realise what things were like and what was available beforehand,” he said.