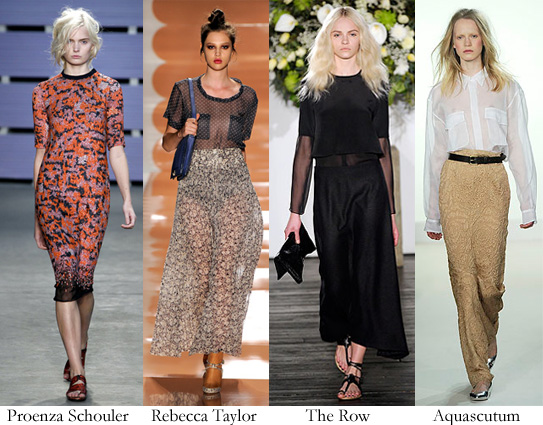 It seems this season’s fashion trends are going down, way down – but in a good way.

This lengthy fashion statement made an appearance in all the latest fashion weeks in Paris, Milan, London and New York.

From skirts that skim the ankles, to those that fall across the upper shins and every length in between, it’s time to put away the micro-mini and go long.

We’ve become accustomed to runways full of skin-revealing skirts short enough to be tops, but it seems the designers are embracing the longer style skirt.

But is this trend towards longer lengths a societal move towards more modest dressing?

An expert in fashion history and theory, Kathleen Horton, says although it may just be for the sake of difference from the flesh-filled runways of years past, the longer lengths could be seen as a throwback to more austere times.

“Long skirts were last popular in the 1970s when they were called maxis, they were a reaction against the mini. At the time they symbolised a counter-culture movement, and were associated with hippies, who were in turn well versed in wearing their grandmother’s clothes – wearing long skirts at this time usually had a bohemian aesthetic,” Ms Horton says.

“Changes in style have less meaning than they had in the past – it seems like it is yet another ‘retro’ trend and could be a bit of a reaction against the very short skirts and high heels that have defined the youthful aesthetic for the last few years.”

Other than the super-long skirt another striking trend is the retro look inspired by the fifties and sixties.

Feminine and slightly flared skirts to the knee and just below – what you might call the ‘perfect housewife’ skirt of the fifties – could be seen as a nod to that era.

Horton also says it’s been a long time since we’ve seen this silhouette and that the long skirt can transcend to night and day.

“Everyone looks good in a long skirt – I have a wrap around red denim one that I bought at the markets for $5 recently – I love it!”

Brisbane-based fashion designer and style expert, Sacha Drake echoes this sentiment and thinks the new longer lengths will sell to all age groups.

“Eighty percent of clothing produced is based on some form of trend. Whatever is available in stores does influence people’s choices, especially at the lower end, it’s all fast fashion, copied from London, Milan.”

“This spring is all about the maxi dress or skirt. Whether you choose to take your hemline high or low, winning the style stakes involves following some basic styling which many people can embrace ,” Ms Drake says.

Drake says this look is fresh and a floor-length skirt can really make an impact.

“Perfect for an elegant night out, or pretty for a picnic with tea, skirt lengths are going from mini to major. Silky bias, full skirts in cotton or beaded in chiffon prove that the long skirt is a statement maker that will complement any girl’s figure,” Ms Drake says.

The long skirt, in all its forms, has always been an integral part of ladies fashion and no wardrobe would be complete without one.

So it’s time to reminisce about decades past and take things to new lengths.