The highs and lows of Larry Olsen 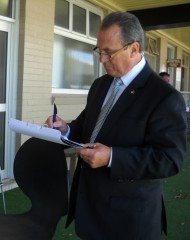 A famous saying in racing is that weight can stop a train. In 1987, Larry Olsen made one of the most inspirational comebacks in racing history. After five bouts with retirement due to ongoing weight problems, the Queensland jockey beat his demons and the critics to win the most famous two-mile handicap in the world.

Born in 1948 and raised at Nudgee Beach in Brisbane, Olsen “was always mad on horses…working with them before and after school.” He dreamt of nothing but being a jockey.

It was with trainer Mal Barnes where he “first learnt to ride ponies,” and a life-long passion was invoked. By the age of 13, Olsen had left school to pursue riding full-time.

“When I was 14 I could become registered so I started riding track work at Eagle Farm,” he says.

At just 15, Olsen had earned his first race ride at Sydney’s Canterbury Racecourse in 1963, and his first win came in a three horse race at Gatton; ironically, it would be at the same track he would stage his final comeback decades later.

Young Olsen’s promising career had already begun to be plagued by his battle to ride at the then minimum of 47 kilos.  Today the minimum for jockeys is 53kg, with allowances.

Termed a “heavyweight” jockey, come race day Olsen was “lucky to get a couple of rides, whereas the lightweights could ride a full book.”

There were many occasions Olsen felt close to defeat, “Even if you were 51 kilos in those days you were considered heavy, these blokes today jump on the scales at 53 and think they’re a lightweight.

“Then I picked up the ride on Triton, who I won my first major race on, the 1972 Stradbroke Handicap at Eagle Farm.”   Triton and Olsen then went on to beat all before them in the celebrated Epsom Handicap, beating the famous grey Gunsynd.

But the battle with the bulge continued to dog his otherwise burgeoning career.  “I always struggled to ride below 51 kilos, any day I could be 57 and then try and ride 51 so you can see how bad it was.”

When asked how this was possible, Olsen replies he “did it wrong, a lot of sweating and dieting.  You’d starve yourself for days and sweat it out when you could eat, you’d eat your head off it was just like a toilet seat up and down, up and down,” he laughs. 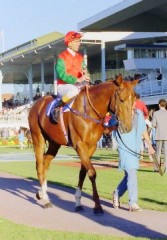 Worth the weight: Olsen aboard Kensei at Eagle Farm in 1988. Source: Ross Stevenson, with persmission

Between 1981 and 1983, Olsen repeatedly gave the game away and returned, no fewer than five times.  Finally, when the colt Best Western he was riding for Bart Cummings retired to stud, Olsen seemingly retired for good.

“There was a period around 1983 when I really gave it away.  I moved to my dairy farm in Kyogal where I milked over 160 cows.”  During his three year hiatus, Olsen and his wife Maureen sold the dairy farm and moved back to the Brisbane suburb Fig Tree Pocket in 1985. They opened the first Horseland store (a saddlery business) in Queensland.

It was here that the next stage in Olsen’s career began. “I lived about eight kilometres from the shop and I started walking and then running.  By this time the weight scales had been raised and thought I might be able to get back into racing.”

Not many people believed he could make the comeback again, Olsen admits his weight had climbed to over 80 kilos.  By the time it was Christmas 1986, Olsen was down to 51 kilos.

Olsen approached respected Brisbane trainer Pat Duff and started riding work for him at Eagle Farm.“I hadn’t been on a horse for three years but Pat was great, and I had my first ride for him at Gatton for him. I think I rode two seconds.” 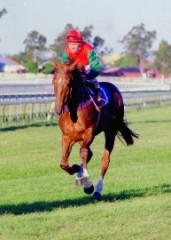 He’s back and better than ever before

Before long, he found himself riding doubles and trebles all over Brisbane.  Eventually with further tweaking of the diet and exercise routine, Olsen dropped to 49 kilos and began his climb back to the top of the riding ranks.  “I was in Sydney and I won the Epsom Handicap again and was lighter than I had ever been in my life and I could ride anything, compete with the others, fit and well because I was doing everything right.”

On the first Tuesday in November 1987, Olsen finally achieved his childhood dream and rode the Les Bridge trained chestnut Kensei to victory in the 1987 Melbourne Cup.  A clever, tactical ride saw Olsen guide his mount along the fence in the dying stages, to surprise the leaders and race favourites, Empire Rose and the blue-blooded Rosedale, trained by Bart Cummings.

“It’s a lovely feeling and I could never, ever ride a better race than I did that day. Most are great rides but I had to pull that one out. To win something like the Cup, well nothing’s bigger than that, nothing.”

On the same day, Olsen was found guilty for ‘not letting a horse run on its merits’ and was subsequently disqualified for a year and warned off all racecourses.  “I had three rides that day, I rode two winners and the other horse I rode was Sound Horizon, who I’d won the Epsom on the start before…but the stewards charged me.  I appealed to the racing authorities and fought it and beat it, which I had to: it was just a joke.”

The affair left Olsen with a very sour taste in his mouth and much lighter in the pocket.  Later in the same season, he famously out-smarted fellow jockey Jim Cassidy in the 1988 Golden Slipper to win on Star Watch. 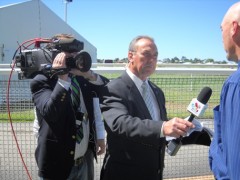 After returning to ride in Brisbane, Olsen finally hung up his irons in 1998, when he was 50-years-old.  “There was a meeting at Eagle Farm and one thing I was riding there was a 100-1 shot and I thought to myself what am I doing here?”

Olsen privately decided it would be his last ride as a professional jockey.  “I didn’t tell anyone I just came back and packed my port.  I didn’t think I would ever last that long, I thought by 18/19 there was just no way I could stay a jockey but along the way I persevered.”

Olsen believes the weight scales were raised too late in his career and if he was starting off today, he’d be much more competitive.   “But I can’t complain about my life. I had a wonderful time as a rider I rode all over Australia, overseas in Singapore, Hong Kong, England and represented Australia on a couple of occasions.”

With an interrupted career spanning 35 years, Olsen amassed over a thousand winners, 24 of them at Group One level.

In 2007, he was inducted into the Queensland Racing Hall of Fame.

“It doesn’t matter where I go I’m accepted.  When you win a race like the Melbourne Cup it’s just wonderful thing in your own mind and the recognition goes far and wide because even if you travel over the world, everyone knows the race that stops the nation.”