Sunshine coast beaches are next in line to trial the security system which places cameras along the coast, to help prevent unnecessary deaths.

The camera and speaker system has the ability to send messages and images of distressing situations back to a localised unit.

Text messages are sent to on-call lifeguards who are aware they are to immediately respond to the alarm.

The cameras will be placed along infamous ‘black spots’ where lifesavers are unable to patrol.

Beaches included in the proposed plan include Noosa’s ‘unofficial’ nudist beach at Alexandria Bay,  which has seen three deaths since 2003.

Nude activist Dario Western supports this plan and feels it should not affect nudists wanting to visit the beach.

He says they are already aware that they are on display and are doing nothing to warrant extra attention.

“I don’t really have a problem with it, I have been a nudist for the past 20 years and have been going to Alexandria Bay since 1991.

“For the most part, everyone there is very well behaved.” 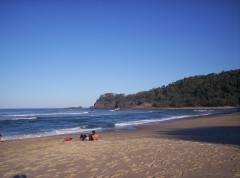 Widely known for its nudist culture, Alexandria Bay is a popular destination on the North Coast. Photo source: Rachel Claxton.

Surf Lifesaving Coordinator at the Sunshine Coast Aaron Purchase is positive the cameras will improve their ability to better patrol beaches.

“It’s something that Surf Lifesaving Queensland have had in place for a few years.”

“At the moment the introduction is more about the technology surrounding the equipment and what they can and can’t do.”

He’s confident the community will support the plan as it’s helping to keep beaches safe and enjoyable.

“In general the feedback that we have had has been quite positive, majority of the people understand that our aim  is to have zero preventable deaths and injuries across our beaches.”

“There are still plenty of hours that aren’t patrolled, so I think it is still necessary to have the Surf Lifesavers there for protection during the busier periods but using surveillance as an extra precaution is a great idea.

Gold Coast beaches have already begun a three to six month trial of the cameras and Surf Lifesaving Queensland will introduce them along the Sunshine Coast immediately after.

The current trial is to evaluate the effectiveness of the camera’s abilities and is taking place for the most part on beaches at Surfers Paradise.

“We are known for our beaches and tourists come from all over to spend time on them. This is helping to make everyone on these beaches feel that little bit safer.”