Strawberry season over in the South East

The commercial strawberry season has come to a halt six weeks earlier than expected as flash floods struck farms across the state’s south east region.

Owner of Eumundi Strawberries on the Sunshine Coast Ray Ladwig has been left picking up the pieces after a week of torrential rain. 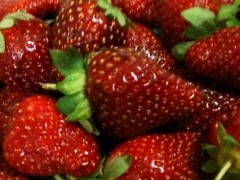 “It’s a huge loss to us, we’re having about a 75 per cent throw out at the moment and if weather persists like this over the weekend we’ll probably have to finish for the season but we were hoping to go for another month,” Mr Ladwig said.

Mr Ladwig said it’s disappointing for staff who had to be let go earlier than usual.

“We’ve got about 35 people on staff at the moment and they will be affected as they’ll have to find work elsewhere,” he said.

The Wamuran Company supplies fruit growers on the Sunshine Coast with equipment and Retail Manager Bruce Koppen said the weather caught farmers and businesses off guard.

“This time of year towards the end of their crop and having this amount of rain is something that a lot of the growers out there haven’t expreienced and weren’t prepared for it,” Mr Koppen said.

Creating a downturn spiral affect, it has had a negative impact on Wamuran’s profits.

“It’ll probably take about 10-15 per cent of our bottom line at the end of the year,” Mr Koppen said.

Laurens Grobler from the Queensland Growers Association said capacity is down across South East Queensland.

“The whole Queensland strawberry industry is running now at around 30 per cent capacity,” Mr Grobler said.

“With all the rain across the highway the water replicated one big dam and all that water went through Strawberry Fields,” he said.

The owner of Strawberry Fields Jon Carmichael was left devastated  by his 50 tonne loss and says the season is all but over for the year.

“When it rains strawberries don’t like prolonged rain and then we have to pay people to pick them off and throw them away,” Mr Carmichael said.

“We can handle it once or twice but when it’s this continuous and this hard as it was this last instance the labour costs to clean up the farm just aren’t worth it,” he said.

Tourists will still be able to go and “pick their own” at Strawberry Fields farms at Palmview and Stanthorpe over the Summer.