Spanish culture is on the rise

It’s sexy, sultry and just a little bit spicy and, according to renowned Brisbane food critic Jan Power, Spanish food is well on its way to becoming the number one international cuisine for diners in Brisbane.

“Spanish food is very popular in Brisbane and as we have a similar climate and similar personalities it works because we always need a change,” Ms Power said.

“I’m a total fan of Spain, they do everything well, eating to them is a total social component and something to share,” she said. 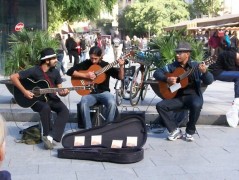 As summer approaches and everyone dreams of squeezing into their itsy bitsy teeny weenie bikini, the Mediterranean diet appears to be in sync with both the Queensland climate and its health conscious, trendy population.

The ingredients used in Spanish cooking are known to be fresh, natural and nourishing, with liberal use of herbs, oils and spices delivering scintillating flavours.

Queenslanders are jumping on the Mediterranean bandwagon with nine Spanish restaurants currently operating within a 5 kilometre radius of Brisbane’s CBD.

Additionally, people are trying new and exciting delicacies at places from fine dining eateries to backstreet cafes or even sharing tapas and sangria round the deck at home watching the Queensland sunset.

Bistro C on Noosa’s world famous Hasting Street has hosted a Latin night every Wednesday for the last two years and the atmosphere, including Latin dancers, Spanish inspired cocktails, cuisine and cool canasta beats spun by Spanish DJ Seanesco Rodriquiz, make the patrons and staff feel like they’re in the midst of magical, midnight Madrid.

Bistro C waitress, Tania Martin, says she looks forward to Wednesday and the surprises the night may bring.

“I’ve been working here for a year now and Latin night is by far my favourite shift to work; it’s a crazy night with so much laughter and adventure,” Ms Martin said.

“The atmosphere is amazing and everyone from staff to families to groups of friends get involved in the food, dancing and sheer fun of it all,” she said.

Language and Latin dance schools are also seeing increased numbers of people seeking to learn Spanish and the sexy, seductive and sultry moves of the Tango and the Samba.

Latin dance teacher Anthea Tert, who’s been dancing for 33 years, believes the Spanish way of life is taking over as the international flavour in terms of music, culture, food and dance.

“I teach private classes and there has been a huge growth in popularity in the last two years as there are more people wanting to learn just for fun,” Mrs Tert said.

“Spanish music is very rich, it makes you feel like dancing and it has a special way of reaching people internally,” she said.

“People like having variety and trying lots of different things and as the food comes out gradually it makes it ideal for the individual with our tapas train, couples or larger social groups,” Mrs Telecian said.

“We have Spanish tourists drop by for an authentic meal, however, we mainly cater to Brisbane locals, particularly those who have travelled to Spain and are passionate about the food and culture.

“I opened the restaurant after a trip to Spain, realising there were Spanish quarters in both Sydney and Melbourne yet there was a market for Spanish food in Brisbane that had yet to be discovered,” Mrs Telecican said.

A patron dining at Pintxo, Jason Quinell, said he would definitely be back.

Seeing as Spanish cuisine is sizzling hot right now, you may venture out this summer, sangria in one hand, flamenco fan in the other and adopt a fearless fixation for the ‘latest’ fashionable food!