Suburbs in Brisbane’s north were hit the hardest with flash flooding occurring in Toombul, Boondall and Carseldine.

Ben Annells, senior forecaster at the Bureau of Meteorology says measured rainfalls were quite high.

“Our SES 132 500 number has been obviously fairly busy, we’ve got a number of jobs from about 3am which relate mainly to flood and storm damage.”

His main advice to the public was to be careful out there on the roads.

“Don’t drive through flooded roads or floodways,” he said.

“Even if you’ve got four-wheeled-drives and you think you can handle it, it may be deeper than what you expect or there may be damage to the road underneath and you may get yourself into trouble.” 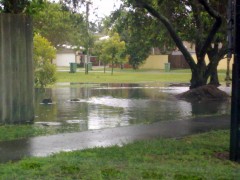 Graham Metcalf from Energex said over the weekend of October 9 to October 10 around twenty thousand homes and businesses lost power.

Mr Annells from the weather bureau said the rain was expected to ease off by this week.