This will place the value of the Top 50 Australian Stock Exchange Company between $6.1 billion and $7.3 billion. 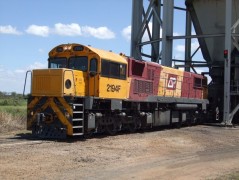 The float is at the forefront of the State Government’s controversial $15 billion sell-off of five key assets, aimed at fixing the state’s budgetary problems and restoring its triple A credit rating.

Opposition leader John Paul Langbroek says this is not a smart move on behalf of the Bligh government.

“The risk is that we’re losing control of something that we currently own and we think that Queenslanders want to own it, 80 per cent say that we shouldn’t be selling our assets in a fire sale simply because Labor went broke in a boom,” he said.

Like the privatisation of Telstra a decade ago, the QR National shares are aimed at Australian ‘mum and dad’ investors.

“QR National are the largest freight operator in country, they don’t have a lot of direct competition and it is coming off the back of a resource boom which is still going to continue for some time; in short it looks good and it should help the state dramatically,” Mr Jones said.

By contrast, stockbroker Warwick Foot warns investing in QR National is not without its risks.

“Predominantly the risks relate around the volume of coal shipped across their below rail assets so essentially they miss out on contract renewals with the big mining companies that would have a detrimental effect over the next few years,” Mr Foot said.

The retail price, institutional price and the basis of allocation will be announced on November 22.