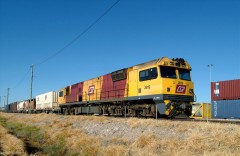 QR National is soon to be in private hands. Image : QR National.

The upcoming QR National share offer may not have as sweet a reward as the initial investment, with one senior analyst claiming the shares are overpriced and of poor quality.

The controversial sale of the rail freight business is part of a larger assets sale in Queensland, with the Queensland government set to sell $15 billion of public assets.

The privatisation of QR National is the second largest in Australian history, second only to the Telstra share offers made available in 1997, and will raise more than $5 billion for the massively in-debt Queensland Government.

An initial overview of QR National is promising for investors, as the company is the largest in terms of freight haulage in Australia, and has increased its freight haulage by 49 percent in the last 5 years.

With 1.68 billion shares on offer, they are likely to be suitable for ‘mum and dad’ investors looking to invest in something solid, rather than experienced traders of the stockmarket.

But James Greenhalgh, senior analyst for The Intelligent Investor, a leading research publication based in Sydney, says there are a few major concerns for potential investors.

“Our main concern is that QR National is sucking in too much capital, and won’t provide enough return for shareholders down the track,” Mr Greenhalgh said.

He said QR National’s dividend year would be quite low, around the 3 percent mark based on a $2.80 share price.

Mr Greenhalgh also brought light to the $150 million subsidy that will be provided to the company once in private hands, due to the unprofitable nature of QR’s livestock and grain transporting sector.

The subsidy will be provided until 2015, with no indication of whether it will continue beyond that point.

“Who knows (what will happen)…in 2015, the fundamental issue is you’re investing in a company where one of its divisions is unprofitable, and the only way it remains profitable is through a government subsidy,” Mr Greenhalgh said.

However, Queensland Treasurer Andrew Fraser, said investors need to decide for themselves.

“There was a lot of negative media before the sale of Telstra in 1997 too, but the returns for those shares were very positive even after 6 months,” Mr Fraser said.

He also added that overseas interest in coal, QR’s efficiency in delivering export commodities and the overall increase in the size of QR’s operation made it a safe and solid investment.

The share offer for QR National was made available this Monday, and will close on November 12.