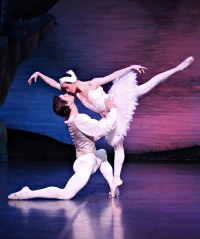 Theatre-goers can peer behind the onstage magic.

An exhibition commemorating the 50th anniversary of the Queensland Ballet Company has opened at the Queensland Performing Arts Centre, much to the delight of Brisbane dance lovers.

Built around up to forty-five costumes, the exhibition entitled ‘Keeping the Dream Alive’ pays homage to not only the artistic directors, but the hundreds of dancers, designers, costumeliers and support staff who have toiled away on and off the stage over the last half century.

QPAC Curator Christopher Smith says despite the recent poor weather the exhibition has already had hundreds of visitors through its doors, in part because costume exhibitions are traditionally highly popular.

“I think people love the opportunity to get up close and personal with performers and particularly with dancers,” Mr Smith says.

“The things that they wear are really quite fascinating close-up and you really don’t get to see that detail and that structure when you see them on stage.”

Rarely are theatre-goers given the opportunity to peer behind the onstage magic and revel in the extraordinary workmanship that goes into the creation of a dance production, says Mr Smith.

“All those people that work away behind-the-scenes to make sure everything looks seamless when you see it and I think dance of all the performing arts really epitomises that because at its best it looks absolutely effortless but we all know a huge amount of effort’s gone into it,” Mr Smith says.

General Manager of the Queensland Ballet Company Judith Anderson is thrilled with the final result and attributes the exhibition’s success to Mr Smith’s longstanding connection with the company.

“One of the lovely things as you walk into the exhibition you see a flight of swans… well it’s actually swan tutus but it’s just gorgeous the way Christopher Smith, the curator of the exhibition, has put it together,” Ms Anderson says.

“I think it’s because Christopher for many years was actually a designer here for the company so he knows the company, knows its history and has a great deal of affection for it as well.”

While costume and design are the main focus, storyboards, photographs and performance videos have also been interwoven into the exhibition, giving a snap-shot of the company every five years over their fifty-year history.

This is the first major retrospective on the history of the Queensland Ballet Company.

Ms Anderson is glad the exhibition shines a light on the often unrecognised heroes of dance.

“It’s also a wonderful representation of the work that is done by the costumeliers who have taken those designs and turned them into real, working garments,” says Ms Anderson.

“That’s a very specialised skill because at the one level while they look incredibly beautiful and sometimes fragile on stage, for costumes to be danced in they need to be incredibly robust… they’re the ‘King-gee’s’ of the stage.”

Confirming the artistry of the costumelier, there is still one item you will be surprised to find missing from the many charming and elaborate costumes on display.

“The only reliable method of closing a costume when it’s being used in the way ballet costumes are used is hooks and eyes.”

The exhibition will be showcased at QPAC in the Tony Gould Gallery until February 19, 2011.