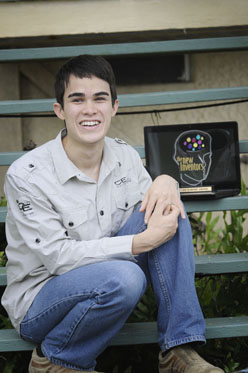 The software allows the user to hear the words on the computer screen as they type them.

Queensland University of Technology (QUT) graduate James Teh and business associate Michael Curran have developed a “screen reader” software that is accessible and easy to use.

They started working on the software in 2006 and were rewarded for their hard work when they were presented with the “Les* Is More” Award on ABC’s New Inventors, in September.

The NVDA (Non-Visual Desktop Access) is one of the only free software programs for anyone with impaired vision.

A synthetic voice reads the words on a computer as the cursor moves over them or as they are typed.  There is also a pitch beep tone that gets higher or lower to navigate the user.

Mr Teh says it is not an original idea they came up with, but it is free and they have already had over 50,000 downloads.

“There are other products like this. Other screen readers as we call them, and they’ve existed for quite a while now. But they’re quite expensive, we’re talking potentially up to over a thousand dollars,” he says.

What it is used for

With around six hundred thousand Australians expected to become blind or vision impaired in ten years time according to Vision Australia, this screen reading software has opened up a new world of opportunities when most work is computer based.

“Being able to access a computer for blind people is incredibly important, given the wealth of information that’s out there. And so it’s really important that something like this be available for free,” says Mr Teh.

QUT Student Leah SanGabriel says the program has helped her out a lot this year especially without the worry of the cost.

Now she is able to browse the internet, check emails, go on facebook and use programs that will help her out at university.