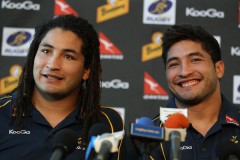 For Saia and Wallaby brother Anthony, breast cancer is an illness that has greatly affected them, witnessing their grandmother fight and survive the disease.

“People don’t realise how serious it (breast cancer) is until it happens to a loved one,” Saia said.

“Nan is one of our biggest supporters so all we wanted to do is support her…I don’t think she’s ever missed a game in Canberra.”

Nicole Lovelock from the National Breast Cancer Foundation believes that the Fainga’a twins are in a unique position to positively promote breast cancer to men and children.

“Promoting mammography has proved to be the most effective weapon used to fight breast cancer,” she said.

“Early detection and staging will affect prognosis and survival rates. Raising awareness has encouraged more people (including men) to get themselves checked and these boys are in a position to do that.”

Dr Bruce Armstrong, a professor of Public Health at the University of Sydney admits that after skin cancer, breast cancer is the most common form and he encourages woman to be checked annually.

“Even with modern technology, one in 11 women will still be diagnosed with breast cancer before the age of 70,” he said.

“The earlier people get checked, the easier it is to cure.”

So far the Fainga’a twins have reached 2,886 followers on their Twitter page.

Currently following the cause are celebrities Kylie Minogue, Miranda Kerr and Megan Gale.

In addition to his contribution to the breast cancer cause, Saia donated a signed Queensland Reds jersey for auction at an epilepsy awareness fundraiser last weekend.

“Obviously, playing for the Wallabies has allowed us to promote certain charities that men are often unaware of,” he said.

“To get such a great response for two blokes who throw a ball around for a living is rewarding in itself.”