The Urban Development Institute of Australia (UDIA) said Queensland is classed as ‘unaffordable’ and another pending interest rate increase could knock out a further 20,000 homebuyers.

According to the UDIA, the current median house price of $434,000 would need to fall by approximately $100,000 to be affordable to 50 per cent of Queensland families.

The UDIA study proposed that if a family wanted to buy a home today with a 10 per cent deposit, using 30 per cent of their income for repayments, only 35 per cent would be eligible.

However member liaison manager for the Real Estate Institute of Queensland (REIQ) Brad Kerrisk said the report is misleading as a median house price for the whole state is theoretically inaccurate.

“To have a median house price for all of Queensland is very difficult to understand because of the huge discrepancies in price throughout different areas of the state,” he said.

Director of policy for the UDIA Martin Zaltron said the report is a hypothetical model aiming to provide insight to problems faced by a large portion of first home buyers.

“It relies on census material, spread of income and makes some assumptions as to how much deposit you would be putting down…but I think it’s a very good guide to put numbers around what people are seeing on the street,” he said.

The UDIA said the report will be used to target costs and taxes that go into creating a house price.

“We are trying to highlight areas for the government or the industries to try and respond too,” Mr Zaltron said.

The steadily increasing value of Australia’s dollar has delayed the Reserve Bank’s decision of necessitating further interest rate rises; keeping figures on hold at 4.5 per cent.

“I would say that, in interpretation, it would add about $10,000 to the notional cost of buying a home,” he said.

“The amount that we can reform these taxes and infrastructure charges is increasingly important to try and bring that median price down or at least moderate it over time.” 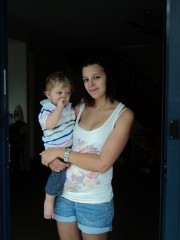 Rochelle Holmes with her son Dylan at their rental property on the Gold Coast. (Rhianna Bull).

Brisbane business owner Rochelle Holmes said she feels the constraints of buying a home when having a family and working full-time.

“When you add up all of your living costs, petrol, groceries, child care, kid’s clothes and a mortgage on top of that it’s just too hard to try and save,” she said.

“I prefer to pay rent at a moderate house on the Gold Coast than applying pressure to buy an unaffordable home close to work.”

The REIQ said the supply and demand associated with South East Queensland will generally support a higher priced property market.

“If you have a lot of people moving into an area, Brisbane in particular, that is always going to support a higher price point than an area that doesn’t have such a demand,” Mr Kerrisk said.

“But in terms of affordability Brisbane is just as affordable as any other part of the state.”

Mr Kerrisk said families should look at purchasing two- or three-bedroom units or a townhouse as they generally fall under the median house price.

“I wouldn’t wait for prices to come down but do your research; see the banks and other lending institutions to find out exactly what you can afford borrow – stay within those guidelines,” he said.

“First homes are simply a pathway to your ideal property.”