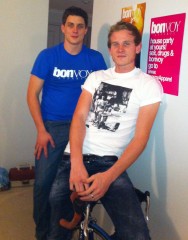 A recent Roy Morgan survey shows four in 10 Australians bought a product or service online in the year ending June 2009, a significant increase of 800,000 shoppers from the previous year.

According to Mr Scott, the internet is the most effective and economic catapult for Bonvoy Apparel, which is marketed at 17 to 27-year-olds.

“When we started off we were particularly looking at a business on the internet, purely because of the benefits from it,” Mr Scott said.

“It’s cheaper to run as you don’t have the upfront cost and running costs.

“I don’t think that you can have a fashion label these days and not have it online.

“It’s kind of the expected especially with the target audience that we go for, we have to be online.”

“You need to be able to have a website, have nice graphics that will attract the people to the products initially, and behind that the profits and the accountancy,” he said.

“I think that’s all you really need, and obviously some inspiration and dedication.”

Bonvoy Apparel vows to always remain online but the young designers have a few tricks up their sleeves in grabbing attention at markets and in stores.

“We’re also getting the beach balls for festivals and letting them loose,” Mr Scott said.

“It’s all about getting the stores to know us before we go in and pitch to them.

“We have A3 posters going out soon, approximately 200 all over the Sunshine Coast.

“It’s even down to the small things like getting our friends to walk into stores and ask for Bonvoy Apparel, before we actually walk in ourselves.”

Chief Technical Officer of Stratsec Nick Ellsmore, a cyber security consultant, said Internet security is a key issue for many online businesses, however many do not fully understand the complexities.

“Application security has become a significant area of investment for many firms seeking to improve the security of their online presence, but on the other hand, many developers still do not fully appreciate what is required to develop a secure web application,” Mr Ellsmore said.

Mr Ellsmore said Paypal and alike services have allowed online merchants to improve the security of their payment options.

“Certainly PayPal, and other services like it, have helped to improve the security of many web applications, through removing the need for the developers of those applications to build in custom payment processing facilities,” he said.

Small business advisor and author of Five Pillars to Business Success, Dr Greg Chapman said online businesses are no different to those offline, and a website should merely be seen as a marketing tool.

“It doesn’t matter whether it is an online or offline business, same principles apply as before the internet,” he said

“I think a lot of people, especially clothing designers, get caught up with the notion of setting up a visual website and no one comes along.

“A website is a marketing tool, rather than a business itself.”

Establishing credibility with the market audience and the media is important to succeed online according to Dr Chapman.

“Google ads are not the most credible method in creating traffic as anyone can post them,” he said

“It is more credible to get offsite publicity such as through newspapers or magazines.

“I think all businesses these days need a website, they seem less credible if they don’t have a website.”

Dr Chapman says an online business can save money in designing its own website, but its professional appearance is crucial as it also reflects the site’s security levels.

“You can save money by doing their own online development, but if you chose to go on the cheap a lot of the time it will look cheap,” he said.

“For online payments the site needs to look and be reputable, and it needs to have a security certificate and the little lock in the corner of the browser.

“Not everyone will know these things, but most people can smell a non-reputable site.”

Dr Chapman believes it is more difficult to start a clothing business online than a music business as people can try what they are buying with music samples.

“There are some businesses harder to run online rather than offline, such as clothing businesses where people want to try on the clothes or shoes,” he said.

“A good strategy to have is to have a website in addition to a store, so that people can try on your clothes and get their size.

“CDs and music on the other hand may be easier to sell online as people know who their favourite artist is.”

Entrepreneur and founder of RedBalloon, Naomi Simson started her online business nine years ago with little knowledge of the Internet.

“I had a marketing background and I started [RedBalloon] with no experience of online businesses,” Ms Simson said.

“Nine years ago when we didn’t really know much about the Internet, we didn’t know exactly what we were doing, we just had to try everything.”

Starting a small business depends more on personality of the entrepreneurs than their skills and experience according to Ms Simson.

“A lot of people with no experience start successful businesses,” she said.

“It depends more on personality.

Like Dr Chapman, Ms Simson believes the Internet is a marketing tool and a well-established business plan is essential for success.

“An online business is like any other business,” she said.

“The Internet is just a facilitation, you still need the infrastructure.”