Northside residents are being left in the lurch as the Queensland Government and the Brisbane City Council bicker over improvements to traffic black spots. 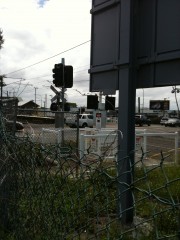 Residents have been waiting for several years now for the Council and the Government to fix the problem level crossings at Telegraph Road in Bald Hills and Newman Road in Geebung.

The State Government is arguing the Council took four and a half years to submit a business case for the Geebung crossing and that the Bald Hills crossing proposal only reached the government last month.

“At the 2004 election, council made five promises in relation to level crossings including Telegraph Road,” a spokesperson for Ms Nolan said.

“Six years later, all that they’ve delivered are a couple of business cases asking the State Government to pay for it.”

The Council isn’t expecting the Government to pay for all of it, though.

The Council has budgeted to pay for half of the $85 million Bald Hills project and half of the $163 million Geebung project, despite railways being a responsibility of the State Government.

The Government, though, has pushed development back even further, with residents now having to wait until sometime between 2020 and 2026.

To residents, the Government’s foot-dragging is all too familiar.

In 1999, mother of four Kerry Monks was killed in an accident at an infamous traffic black spot nearby in Bald Hills.

Kluver Street, where the accident occurred, had long been known by residents as a dangerous road due to its sharp turns and use by heavy trucks.

A far safer extension road had been proposed for years but never built. After the accident, though, the road was quickly constructed.

Jim Kershaw, Media Relations Manager for the RACQ, said although many level crossing accidents are caused by reckless drivers, blame can also be placed on the roads themselves.

“The authorities need to make sure that where possible, the crossing is visible and sometimes it’s built in such a way that it may not be that visible,” he said.

“Some are more obvious than others, some have problems. Some are right in the middle of very busy streets and very busy intersections.”

The Newman Road level crossing in Geebung fits that description, the crossing sandwiched between two t-junctions on a main road, both with traffic lights.

The crossing has been a fixture on the RACQ’s regular Red Spot Survey, with locals complaining its position between the two t-junctions helps cause lengthy delays and confusion.

The Telegraph Road crossing has been publicly derided for years, too, with the most recent accident occurring ironically on the same day as the launch of a level crossing safety campaign.

“I personally can’t see a reason why there are two sets of lights,” he said.

“It seems like the same ‘we will fix the problem with more traffic lights’ philosophy that was used on the Airport roundabout, and look how that turned out,

Mr Clarke said the crossing needs to be fixed, but an expensive overpass isn’t necessarily the only option.

“Level crossings can work. Someone just needs to take a really good look and figure out the best timing and configuration for the lights,” he said.

“Quite often we find out as well that shouting out about these things is a good idea,” he said.

“When a Red Spot survey comes out, for example, the paper in Bald Hills will probably do a story on the crossing, and so there’s more pressure on politicians and councillors,

“Sometimes naming and shaming is what you have to resort to.”