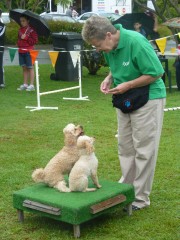 Despite the rain and windy weather about 150 volunteers, staff and community members braved the grounds of St. Martins nursing home in Taigum to attended their fete on Saturday.

The fete aimed to provide a means of fundraising for St. Martins, entertainment for participants and to promote community awareness about the facility and aged care.

About 14 stalls were run by staff, volunteers and local businesses and entertainment was provided by the Redcliffe Pipe Band, Wavell Heights pre-school, a local dog school and the Sandgate State School band. 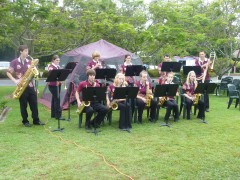 All these events made an otherwise dreary day enjoyable.

“Apart from the weather it was a great success. Everybody seemed to enjoy themselves,” volunteer Lavina Simpson said.

There was a lot of support from the public.

“It’s a nice surprise to see so many people here,” one attendee said.

“It’s something fun the older people can enjoy,” another attendee said.

Facility coordinator Alice Plevier said the fete was organised partly for fundraising and community awareness and partly for the residents.

“We wanted to open [St Martins] up and show that we might be a nursing home but we’re here and we’re part of the community,” she said. 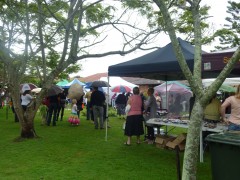 Community members enjoying the fete despite the weather.

“Also [we wanted] to let the residents have something on their doorstep that they can get to.”

Ms Plevier said that for some residents who hardly get to leave their rooms because of health reasons it’s an opportunity to be involved within the community.

“The smiles on their faces is just divine,” she said.

“Most people pay little attention to residential care until they know someone in care,” Professor Barbara Horner from Curtin University said.

“A positive image about aged care is important [because] it’s not all doom and gloom,” Ruth Forrester, residential care officer for Aged Care Queensland said.

“It’s not the end of the road when you go into a facility.

“[Events such as these] are important to get residents out and about in the community as they usually would.

“It’s not about isolating them.”

New South Wales and Australian Capital Territory member for the national office of Aged and Community Services Australia Jill Pretty said it’s important for nursing homes to demonstrate their skills and various services so families can make informed choices about where to send their loved ones.

“Nursing homes have a history of being places you don’t want to go to,” she said.

“It’s important to show the community and older people that they can have a good quality of life [within these facilities].”

Also, facilities need to form money beyond core business because this industry receives “insufficient funding,” according to Professor Horner..