Drugs and heat a ‘deadly’ combination at festivals 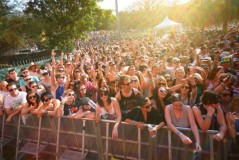 The sun bears down on thousands of drunken festival-goers (Photo Credit: Getanightlife Photography).

As Brisbane’s festival season approaches, doctors and hospitals are preparing for the thousands of men and women who will suffer from medical problems due the extreme heat and exposure to drugs.

Every year thousands of people, wearing very little and under the influence of drugs, make their way to one of Brisbane’s many festivals. It is this combination of heat and drugs which make for a sure-fire medical emergency.

Dr. Charles Wong is a General Practitioner at the Albany Creek Medical Centre and stresses that people who go to festivals are endangering themselves in more ways than one.

“It happens every year; people drink too much or take the wrong type of drug and end up in hospital,” he said.

“Or they forget to re-apply sunscreen and we see them in 20 years time to cut out a skin cancer.

“It (drugs and heat) is a deadly combination, because when people are under the influence of any type of drug they forget about the sun and its impacts in the long-term.”

One person who knows the repercussions of taking drugs at a festival all too well is local boy Daniel Reid.

Mr Reid was having fun with a group of friends at a festival two years ago when he decided to take two ecstasy pills. He spent the next two days in hospital because of a self-induced overdose.

“I’d had a lot to drink and it was a really hot day; so I was already feeling a little light-headed,” he said.

“I figured the pills would give me more energy to keep going, but they only made it worse.

“The next couple of days are all a bit of a blur, but I’ll always remember that split second when I wasn’t sure if I was going to live.”

Dr. Wong says he sees this happen all the time, and it’s the reason he feels so strongly about festivals.

“It’s not always an overdose, sometimes it’s simply a bad headache or migraine, but it’s all because of the heat and alcohol,” he said.

“People need to learn that the sun has a dramatic effect on how much alcohol the body can take.”

The first major festival for the summer, Stereosonic, has recently had its rules updated to state that everyone must wear a shirt at all times.

Organiser John Curtin believes that this will make the festival a safer environment and should help prevent a large portion of injuries and emergencies.

“We want to make patrons feel as comfortable as possible in a safe environment at our festivals; so we are being pro-active and have implemented a clear set of guidelines,” he said.

“I am sure for other events people will be able to go ‘tops off’ but for our events we have taken a stance and decided to trial this.”

In hindsight, Mr Reid certainly would have appreciated these rules two years ago and believes that it may have saved him from overdosing.

“Obviously it wasn’t the heat that put the pills in my mouth but when you and your mates have your shirt off and you’re dancing in the heat, sometimes you do things you wouldn’t normally do,” he said.

“It’s like being in primary school when it starts to rain; you just get a little crazy.

“I’m just grateful that I learned a valuable lesson to not lose control and always be wary of your actions, especially at festivals.”

It is clear that whilst festivals can be an enjoyable experience, anyone who is attending needs to be aware of the dangers which can occur whilst drinking, taking drugs, and remaining in the sun for long periods of time.