Wear purple to show support for LGBTIQ at risk

Friday October 15 saw Australians decked out in purple to support LGBTIQ (Lesbian, Gay, Bisexual, Transgender, Intersexed and Questioning) youth who are at risk of suicide and self harm. 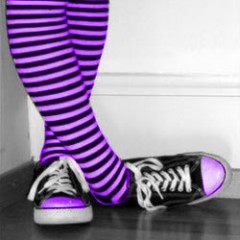 Wear anything purple to show support for LGBTIQ (Source: Photobucket.com)

The Facebook event ‘Wear it purple’ was created to promote awareness that the risk of self-harm or suicide for LGBTIQ youth is six times higher than their heterosexual counterparts.

“It has been promoted widely on Facebook and in the queer press.  Having such a public showing of support for these young people lets them know they are not alone.”

‘Wear it purple’ was created by a 17-year-old Sydney high school student, Katherine.

She was inspired by a similar event in America planned for October 20.

The American event was also created to promote awareness of Queer youth at risk after multiple American teens took their lives due to homophobia.
National Union of Students Education Officer James Butchers, 22, who identifies as Queer, said there is not enough attention about the risks, problems and prejudices experienced by Queer teens and youth in Australia.

“Something like the ‘Wear it purple’ day could really have a good impact,” he said.

Mr Butchers said he has experienced discrimination due to his sexuality.

“It makes you feel different and not good enough in certain people’s eyes, like a second class citizen,” he said.

“It’s very difficult growing up knowing you are different and knowing there are people out there who are immediately not going to like you just because of that.”

“I always thought it was really unfair but I still had no idea how serious the impact of homophobic situations were until a friend invited me to this ‘Wear it purple’ event,” he said.

Despite these attitude changes, Ms Payne said she feels Queensland still needs to be more inclusive.

“A study came out earlier this year called ‘Speaking Out’ which highlighted the high levels of homophobic abuse, both physical and verbal, that people in this state experience,” she said.

Ms Payne said all discriminatory laws against LGBTIQ people need to be removed.

Suicide Prevention Australia’s (SPA) Position Statement on suicide and self-harm among LGBT communities (2009) says a study over the past decade shows gay, lesbian and bisexual individuals take their own life at rates between ‘3.5 and 14 times those of their heterosexual peers’.

SPA says these figures may be higher as most deaths occur while the individual is still coming to terms with their sexuality and/or gender identity, without the knowledge of friends and family at the time.

“It is, however, indisputably clear that younger LGBT people are at an elevated risk of suicide and self-harm, with studies demonstrating that attempted suicide rates for this group are up to six times as high as their cisgender heterosexual peers.

“For progress to occur, heterosexism, homophobia and transphobia must be addressed at the interpersonal, sociocultural, and institutional level.

“This will require a comprehensive approach, ranging from community education campaigns through to legislative measures to end discrimination in all areas (including marriage and parenting rights),” the statement says.

Both Ms Payne and Mr Butchers agree with this recommendation.

Queensland’s Attorney-General and Minister for Marriage Cameron Dick, as well as Queensland Shadow Minister for Health Mark McArdle, were unavailable for comment.