For Queensland mum Bernadette Vella, everyday is one to be thankful for after she was diagnosed with Hodgkin’s Lymphoma just 14 weeks into her second pregnancy in 2008.

Bernadette and her children in a photo shoot, one of the many services Mummy’s Wish offers. Source: Mummy’s Wish.

After carefully weighing the options, she decided to fight the cancer and keep her baby, whilst undergoing life-saving chemotherapy.

Two years later, with two healthy children, she decided to found a cancer charity, Mummy’s Wish, with the aim of supporting mothers diagnosed with cancer who are either pregnant or have young children to care for.

Ms Vella said her motivations for starting the charity stemmed from the lack of support services catering to mothers diagnosed with cancer.

“There was a need for a charity like ours to exist,” she said.

“There was nothing out there that would actually help Mums when they were going through cancer.”

On a particularly hard night in her cancer journey while in an intensive care ward, Ms Vella made a promise to her mother that if she were to live, she would start a charity.

“I had the experience of going through it and thought it would be wonderful to help other people,” she said.

The charity is involved in organising practical services for mothers including house cleaning, hospital parking funds, treat bags and babysitting.

Volunteer for the charity, Kimberley Bennett, said she was unaware of any charities that provided the support Mummy’s Wish offer.

“I haven’t heard of another charity like it that offers this much support, and from people who have already had their own personal journey with cancer,” she said.

Ms Bennett also added that she did not realise the extent to which the support helped mothers until becoming involved with the charity.

“The services help in so many little ways that most people wouldn’t even consider,” she said.

“For instance, I never realised that when you are undergoing chemotherapy, doctors usually tell you that your house needs to be spotless in order to stay as healthy as possible.

“The last thing a mother with young kids who has just had a tiring day undergoing chemo would feel like doing is cleaning the house.

“Organising cleaning, even though it does not seem like a big thing, makes a world of difference.”

As the name suggests, the charity is also involved in granting ‘wishes’ for the ill mothers and their families.

Ms Vella said the wishes were usually personalised to suit the mother and her family.

Two memorable wishes included a weekend away for a terminally ill mother and a coffee table for a family of four children to remember their mother by.

“The mothers and families have been extremely grateful for our services,” she said.

She also said her own personal experience with cancer helped her relate and sympathise with the mothers. 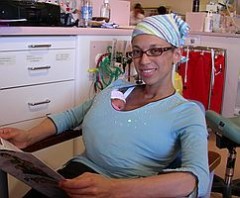 “They love having someone there that knows what they are experiencing and are able to help them in a very personalised way,” she said.

“Cancer is a distressing and difficult experience for anyone and it would be especially hard for women with family demands and are under the added pressures of pregnancy and looking after young children,” she said.

“Mummy’s Wish seems to be a great initiative to provide practical support for women while receiving treatment for cancer.”

Ms Vella named her charity Mummy’s Wish, as it is her wish a charity like hers did not have to exist.

Until that day, Ms Vella’s goal for her foundation is a simple one.

“To be able to help every Mum in Australia diagnosed with cancer,” she said.