The Northern Brisbane Rollers’ Brawl Stars skated their way to glory at their first interstate home game at the Brisbane Convention Centre on Saturday. 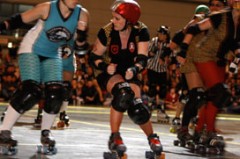 The bout was full of 'power jams'. Photo: Tijana Jaksic

The Brawl Stars are the ‘All Stars’ team from the North Brisbane roller derby league.

An American-invented contact sport on skates, the roller derby scene is gaining popularity throughout south-east Queensland.

Off to a slow start, the Brawl Stars quickly skated their way back into the game, with an even score of 89-89 at five minutes to full time.

Commentator David McGhee (Johnny Pistol) says it was great to see both teams swapping the lead.

“There were two ties, one in the first half quite early on at about the third jam, and then another in the second half,” he said.

“They were pretty close to each other most of the second half.

“But then the Brawl Stars started catching up, and then Bloody Marys would get a jam and take the lead again.”

Mr McGhee says a highlight was seeing two people get ejected from the game after being repeatedly sent to the sin bin.

“But I loved the crowd, it was probably one of the best crowds we’ve had in Brisbane.”

“A close game is always a good game,” she said.

Ms Agtnerhuif says the team, from Geelong in Victoria, made it to Brisbane with the help of much fundraising.

“We had a trivia night, a wine drive, a few sausage sizzles, market stalls, and at our season final we had a mini market at our bout which helped pay to get here,” she said.

“Thank God we came back in the end there,” she said.

Ms Schurmann says roller derby is unlike anything she has ever played and she just “had to do it”.

“I’ve never found anything that comes remotely close to how amazing and fun this is,” she said.

“It’s the adrenalin rush and it’s an awesome team sport.

“It takes all shapes and sizes – everyone has something to contribute.”

The Northern Brisbane Rollers’ next game will be an intra-league tournament between the Love Rockettes and Diner Might Dolls on November 20.